It took about 45 minutes to get to our hotel, we got a quick glimpse of the Giza Pyramids as we arrived at the hotel. It is so surreal! We are actually in Egypt! Wow! I had no idea that the pyramids would be so close to Cairo and hotels, until I "googled" our hotel and there was a picture of the hotel swimming pool and there was the pyramids in the background! How cool is that! 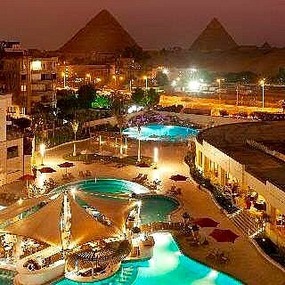 Security everywhere, there were barriers so a car can't just drive in, the barriers were round metal cylinders that came out of the ground. There was a dog that sniffed the car and mirrors to check underneath the car for bombs. Before entering the hotel lobby everyone must walk though a metal detector and luggage goes through an x-ray machine! This was every time we entered the hotel.


My only plan is to get our luggage up to our room, find my nightgown, and sleep!
Breakfast at 6am tomorrow, meet a guide and driver in the lobby at 6:30am to make the drive to Alexandria.


Interesting: Our guide, Mohamad said and Leila Ahmed argues that head covering should not be compulsory in Islam because the veil predates the revelation of the Qur'an. Head-covering was introduced into Arabia long before Muhammad, primarily through Arab contacts with Syria and Iran, where the hijab was a sign of social status. After all, only a woman who need not work in the fields could afford to remain secluded and veiled.[10][18]


For all that religion played in ancient Egyptian life, there was one place it had no role at all: the Egyptian marriage. There wasn't even a civil ceremony. Rather, marriage simply took place when two young people decided to move in together (usually the bride would move in with her husband) and start a common household. But that doesn't mean that marriage was not taken seriously. From the paintings we have found, letters that were left from grieved widowers to their deceased mates, and from statues from all periods of ancient Egyptian history, we see that marriage and a close family played an integral role in ancient Egypt.