Today is an extra day here before the tour group meets tomorrow. We will go to Alexandria today to visit Egypt's second city. See its nineteenth-century architecture and stop at the National Museum, the catacombs of Kom es-Shoqafa and Pompey's Pillar. Great views from Fort Qaitbey, and stop at the Roman Theatre with its marble seating before returning to Giza. 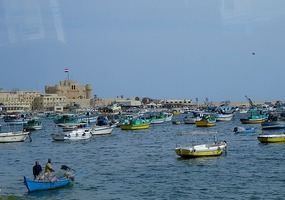 4
Alexandria is a port city on the Mediterranean Sea in Northern Egypt, it's history dates back to the city's founding by Alexander the Great in 331BC and is Egypt's second largest city. We had looked into going to Egypt on our favorite cruise ship company, Royal Caribbean, and it stops at this port, Alexandria, but it would be too far from Cairo. Imagine coming to Egypt and not seeing the Pyramids?
Remember, this was the setting for Cleopatra and Mark Anthony's little stormy relationship. Did you know Cleopatra, (she was actually Cleopatra V11) was only 21 and Anthony was 52, or was that Julius Caesar? Cleopatra was the last Pharaoh of Ancient Egypt and she represented herself as the reincarnation of the goddess Isis.
Alexandria was the capital of Egypt for a thousand years and was the center of culture for centuries.

We returned this evening back to our hotel at 7:30pm. We were so busy that the driver stopped at a McDonald's for us to pick up food and we brought it back to the Van to eat. I tried an Arabian Chicken sandwich (McArabia) with Arabic bread, it was really good.