Trafalgar staff:
Tour Director name: Mohamed Raghib
Tour Rep Name.  : Magdy Anwar
Pickup point for today's tour is the lobby again at 8am. We need to pay for our extra excursions and give Magdy our flight information and copy of our passports for the hotel.

Egypt is open and not many seem to know it! It makes the experience of those who are willing to venture out to Egypt very special! We have a wonderful Tour Director, named Mohamed Raghib. His knowledge of Egypt is amazing, not only the history, but the culture and politics of this very complex country. He is handling everything and makes it very easy for us and he is a great guy! Also, Mohamed is a certified Egyptologist and has a Masters in Egyptian History. This is his first tour in two years and he said he doesn't have another one booked after we leave. He calls us "au Bebe" I finally asked him what it meant and he seemed embarrassed to tell us, but I think it is a term of endearment, I think?! 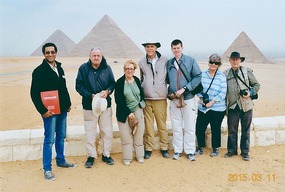 
We had the opportunity to go into places that had been closed to the public, but now with so few tourist going to Egypt they had changed some of their policies. Jim really wanted to go into the Great Pyramid of cheops into the Kings Chamber, but didn't think it was allowed, but he was so happy he was able to do it. The first time he tried to go in, they said no, but he went back a second time and he was let in. They did limit the entrance to 300 people per day, 150 in the morning and 150 in the afternoon. Way too confining for me! Some of the area was so low you almost were on your knees, then another area you had to climb a ladders and walk 2 planks, not for me! I was happy to stay outside with the toutes, and take pictures. 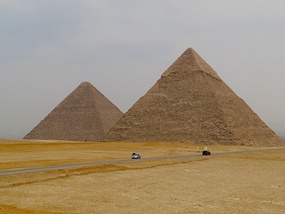 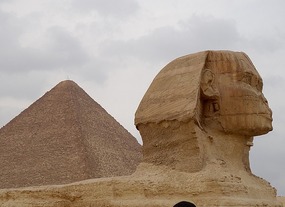 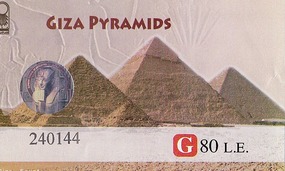 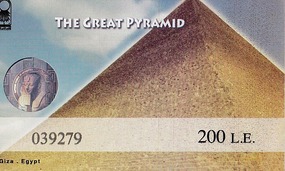 
Cheops Boat Museum - We were not familiar with this Museum but Mohamed was telling us about if and he asked us if we wanted to see it. What a great story behind the discovery of this boat. Built in the shadow of the the Great Pyramids, the boat museum houses the oldest, largest and best preserved vessel ever found in Egypt. Discovered in 1954 sealed In pit around 2500 BC. The ship was built for King Cheops and was apparently part of the grave goods to use in the afterlife. We had to wear covers over our shoes to walk in the Museum. 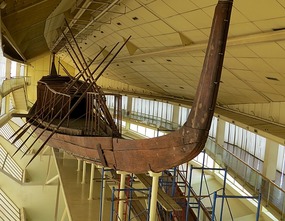 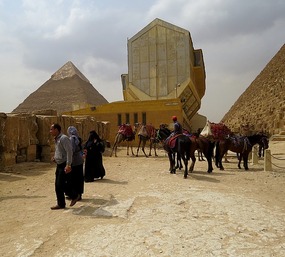 The Cheops Museum next to a Pyramid. 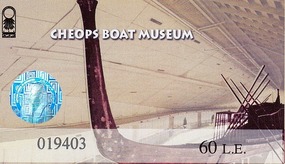 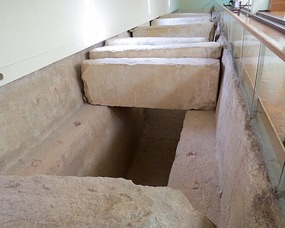 The Actual Pit Where the Boat was Discovered 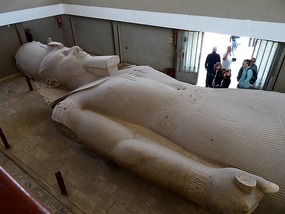 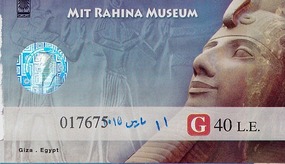 Visit Sakkara and view the Step Pyramid. Marvel at the Great Pyramid of Giza and see the Sphinx. Enjoy a view of the pyramids at night and an unforgettable Sound and Light Show