Fly to Cairo From Luxor

Cairo Sightseeing plans for today: Visit Historic Cairo that is a UNESCO World Heritage Site - the must see - Alabaster and Sultan Hassan Mosques, the Hanging Church of St. Mary and the Egyptian Museum.

We had time for buffet breakfast at the hotel (included) they put out a very nice spread, everything you could possibly imagine. Met Mohammad in the lobby for our tour of Cairo at 8am. Another armed security guy joined us from the interior ministry, (they direct the central Security forces, the police and Egytians Homelands Security) don't know why they are picking our particular group, but guess we shouldn't complain.

Driving from the hotel Mohamed pointed to where the Egyptian Musuem was just across a couple streets from our hotel. He said it wasn't such a dangerous cross by foot because it is Friday, the first day of their week-end. If anyone decides to go there the second time to the Museum, it's close to our hotel, and our ticket is good for all day today. Larry asked if that area was where the famous "Battle of the Camels" happened? Mohamad pointed to Tahrir Square and said, yes. That battle happened on February 2, 2011, The pro-Mubarak men on camels and horses, armed with sticks, attacked protestors in Tahrir Square. But it was a battle they lost turning the tide of public opinion against the Mubarak regime. 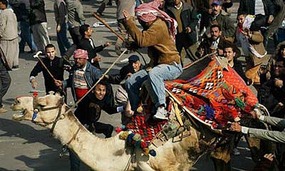 
"In a scene reminiscent of the Middle Ages, men on horses and camels entered Cairo's Tahrir Square on 2 February 2011. The purpose, it seemed, was to disperse the week-long sit-in calling for the ouster of President Hosni Mubarak. The events that followed came to be known as the "Battle of the Camel," in which protesters went head to head with Mubarak loyalists in a fight that lasted well into the next day. The battle left 11 dead, over 600 injured and 25 members and affiliates of Mubarak’s now-dissolved National Democratic Party (NDP) behind bars. It is believed that it was orchestrated by Mubarak’s panicked and embattled regime in an attempt to end the mushrooming uprising and maintain its grip on Egypt. But what it did instead was provide the revolution with the necessary momentum to bring a swift end to Mubarak’s 30-year rule only one week later." 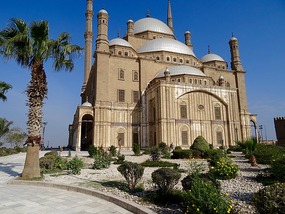 Mosque of Muhammad Ali or Alabaster Mosque
As we were heading toward our first stop, the Mosque of Muhammad Ali, driving though downtown, Mohamad pointed out to us some of the unique and different buildings, he said 150 years ago Cairo was one of the most beautiful cities in the world, more so than Paris and Venice but now with all the polution and overcrowding, the buidings are caked in dirt and have fallen in decay. Mohamad said that the Egyptians no longer appreciate beauty, that they don't even look up to see what the buildings look like. We passed a gas station that had Misr on it, it means Egypt. 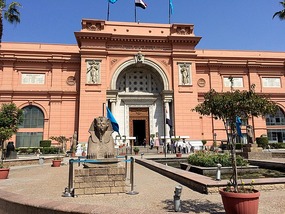 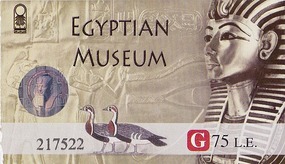 Ticket for The Egyption Museum in Cairo
The last place we visited was the Egyption Museum, very heavy police and military presence, I counted 9 tanks with soldiers in riot gear in front of the museum and a large police presence. The museum is very close to Cairo's Tahrir Square, where the Egyptian revolution began in 2011. had read how old and very disorganized it was but I didn't think it was that bad! The first floor has a large atrium displaying the larger exhibits including a massive pair of statues of Ramses 11. On the first floor there is 42 rooms and the second floor has 47 rooms. It would be impossible to see everything in the time we had, not to mention we are so on, history of Egypt, overload that my brain can't retain much more. The most interesting to me I wanted to see was: 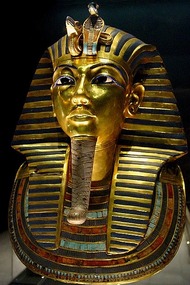 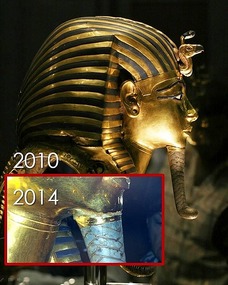 The Before and after, botched version!

#1 Not surprising the most popular exhibits are found in the Tutankamun gallery, and it didn't disappoint. There is 3000 idems, including the most famous of all his "death" mask that is 3300 years old. It was interesting to hear the story about how the beard had recently been broken and someone had just glued it back on! The story kept changing on how it actually happened, even denied that it had even happened, but someone had taken a picture of it being sloppily repaired so last January 2015 they had to fess up! They had even dimmed the lights in the exhibit room so hopefully no one would notice! Anyway, the Chief Conservator was moved to a less glamorous position overseeing the contents of Egypt's Royal stables. 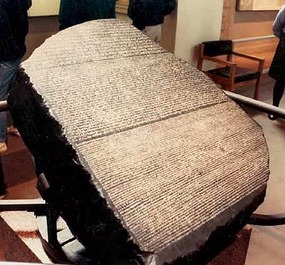 Rosetta Stone
#2 The second most fascinating exhibit to me is the Rosetta Stone and it's hard to believe Egypt doesn't have the real deal! The French discovered it and when they surrendered Egypt to Britain in 1801, it became their property and it has been in the British Museum ever sense. Without the Rosetta Stone we would know nothing about the ancient Egyptians and the details of their 3000 year history.