The quiet town of Hsipaw

-
After a very enjoyable but long train ride it was a welcome sight to finally get off at Hsipaw station and to be greeted by a guy from our next digs who was waiting to give us a Tuk Tuk ride into town and to the guesthouse. It doesn't happen very often but sometimes when we are staying in smaller places it's worth emailing and asking if they are able to pick you up. It's only worked a handful of times but when it does it's great to not have to shell out those extra few pennines or stand haggling for 10 minutes when youve hardly slept and smell like stig of the dump.

Hsipaw is a small town

Sunset Hill together
. In fact in British terms it's more like a village, smaller than say Whitburn is. It didn't take long for the Tuk Tuk to pull into 'Lily the home' where we were staying for the next couple of nights. We were greeted by Lily herself and what a character she turned out to be. The lady does not stop laughing. One of those infectious laughs. You can tell her something fairly mundane and she will be howling as if it's the most hilarious thing she has ever heard, this sets everyone else of laughing and before you know it, it's hard to stop. She's really nice and amasingly hospitable. I think I liked Hsipaw already just because of Lily and her bonkers little white ball of fluff dog. So small she would sit it down on a chair and it would be rooted there until lifted back off, so small are it's legs.

With our bags dropped off we headed out for food and a beer and before we knew it the sun was heading down over the hills and the tiredness started to take over. Time for an early night, the exploring would have to start the following morning

Up early the next morning we grabbed our free breakfast on the roof top taking in the surrounding hills, rice fields and river that arcs around the town. It looked very pitcuresque and beautiful, a million miles away from the dusty grey city of Mandalay. After having a good chat with Lily and being shown a myriad of places to check out on a map we rented a scooter from her and headed off for the day.

Within ten minutes we had left the small town behind us and were slowly trundling down dirt tracks between lush green rice fields and through small traditional villages. Not even villages really, maybe like 20-30 small wooden homes each with it's own tiny little pagoda and golden stupa. We pulled up and bumped into a lad we had seen earlier at breakfast back at Lily's. From Malaysia and just on Holday he recommended a great place for sunset later on and pointed out where to head on the map, the day was coming together nicely.

WF4
. It didn't seem quite right and I think we must have taken a wrong turn somewhere as we were looking to head to a waterfall next but couldn't really work out where we were. We swung a left onto the road and it wasn't long before we hit some toll booths and a wider road called the Oriental Highway. At this point we were stopped by Police and asked where we were headed. We indicated the waterfall on the map and were pointed back the way we had come from. Only one of the three coppers spoke any English and as we pulled away one of the others was indicating he wanted some money from us....erm no matey, head down we sped off and didn't look back.

Eventually through a few locals we were pointed the right way to the waterfall and turned off down a bumpy rocky trail, past a cemetary, through a rubbish tip and into the countryside again. After bouncing our way down some very steep rocky terrain it was clear we needed to park the bike up and make the rest of the way on foot. The waterfall was visible in the distance, cascading down the side of the hills and we parked our scooter at the side of a rice field next to a few other bikes belonging to the locals who were knee deep in water tending to their rice

It must have been around mid day now as the heat from the sun was unbearable. We treked for around an hour, past water buffalo, small streams, tiny random homes at the side of fields until eventually we reached the bottom of the steep hills and the waterfall itself. Sweat puring from us we were disapointed to find out we couldn't take a dip under the falls to cool off. The pool at the bottom was tiny before the water continued over the top of rocks dropping further away. The force of the water would have been too strong and we would have been dragged over the rocks and further down. On top of that due to the power of the falling water it was churning up the bottom of the pool into a thick muddy brown soup.Not the most inviting of water pools.

That said the waterfall was very nice, impressive even, having spent many a trek in Asia only to be disapointed by a small 20ft trickle at the end of it. The spray still cooled us down and we were just starting to enjoy the freshness and shade without another soul around when Dani was stung by some kind of exotic wasp

Keeping cool
. Great. Out in the middle of no where with nobody else around for at least an hours trek, never been stung before so unsure if she was allergic to a sting and on top of that it was by some multi coloured metalic beast of doom that would have looked more at home in a science fiction film than out in the countryside. So without hanging around for too long she seemed ok and we started the trek back just incase she did start to have a reaction.

With everything looking ok and the lump from the sting starting to reduce we reached the scooter and headed off in search of Mrs Popcorns, a place to eat that get's rave reviews around these parts. It was quite far out of town. Along yet more bumpy tracks and past small ramshackle huts and crumbling ancient pagodas. In fact after an hour of searching we were struggling to find the place until we were headed down a small track and spotted a small hand written sign on a fence for it. You could easily miss it. It didn't even look like a place to eat really

Flutterby
. A small plot of land next to a stream with a handful of old rustic bamboo tables and chairs. Sure enough though we were handed a menu and settled in for a chilled juice and a bite to eat. We bumped into a couple of Dutch girls having lunch there as well that were also staying at Lily's and had shared the free Tuk Tuk ride with us the day before. I had spoke with them the night before and they were also looking to do a trek up into the hills and to the more remote minority villages within the Shan state. We knew that Lily's place organised treks but there were other places around town offering them as well and we wanted to make sure we did one with a good guide who could at least speak a little English and explain things along the way. We said we would check a few others out and get back to them later at Lily's. Better to find a small group to go together than just the two of us.

Pagoda
. The photos don't really do it justice but it's a real cool sight. The tree has grown up directly through the middle of the pagoda and now is a fully mature tree with an ancient stone pagoda clinging around it's base. If your ever here take a look for it. It's hard to spot and easy to pass by and not notice it but it's quite the quirky sight when you do find it.

With time getting on and the sun lowering we headed off in search of sunset hill that was recomended to us earlier by the Malay lad. Out of town and across the river we turned off and were climbing the steep winding road up to the top where yet another Pagoda sits looking out across Hsipaw. As we headed up we spotted the lad again, making his way up on foot so after dropping Dani at the top I headed back down to give him a lift up the rest of the way. The view from the top is really nice. The river and town below. The rice fields and small tiny villages we rode around earlier with smoke slowly rising from tiny fires. The hills off in the distance and the waterfall just about visible as a small white streak down the mountain side way past the town

I really like Hsipaw. Just after one day. Sat there, peacufully looking out at the impressive view below. Mountain ranges and countryside disappearing off into the distance, very tranquil indeed. It's got a nice quiet laid back feel about it. No hustle and bustle here, just small town life and countryside all around. A bit like the lake district really but on a grander scale with a Buddhist flavour to it from the various pagodas dotted about.

As the last of the light was disapearing we headed back down and into town to go check out a few guides and see what treking we could do over the next couple of days. We spoke with a guide at another guest house that came well recommended and we headed back to have a chat with Kim and Stefi the Dutch girls. They had already decided to book up through Lily when we got there and they had managed to find another couple from Spain who wanted to come along as well. They had already met the guide and said he seemed like a good lad and his English was pretty decent so Lily's it was then. The trek was to be a two day one staying over night with the guides family high up in the hills. You can do more than the two days if you want but from what we had heard it sounds fairly tough going and most people who have done three or more days say that two is enough and they wish they hadn't done the extra days.

Sounds like a good adventure ahead. A good nights sleep and some rest then before an early start with the trek at 8am. We are eally looking forward to these next two days. 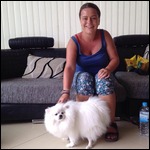 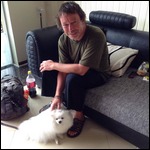 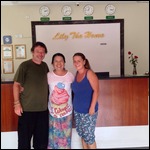