-
After an early breakfast we sorted our day packs out and left our big back packs with Lily and headed out the front to wait for our guide to pick us up at 8am. Kim and Steffi introduced us to Louda and Fransisco from Spain and we were also joined by another Spanish couple who were doing the first half of the days trekking with us before being ferried back to town on the back of motorbikes. It was a good little group and everyone was nice and friendly.

Butterfly
. 20 minutes down the road in a Tuk Tuk and we were dropped off at the side of a corn field and off on our way. I had heard a few people mention that you could do some daily treks along these same routes on your own without a guide but certainly not the route we were taking. Every so often Aung San would dart off through a field where it didn't look like any path existed. Through 10ft high corn, certainly not something you would be able to read up and do on your own...."turn right at the 42nd corn plant then left between rice fields 7 and 8!" This lad really knew the local terrain and which routes to take.

The first couple of hours were pleasant and fairly easy going. Through nice green fields and over small streams, tip toeing along between rice paddies and the climb was nice and gentle. As the sun got higher in the sky the ascent became steeper and higher as well. It started to become a little harder and we were going through water as fast as we were sweating out. At around mid day we left the fields and under growth behind and hit a dusty rubble covered track that climbed steadily up along the side of a valley until we rounded a corner and stopped at a small tea house for half an hours rest and to buy more bottles of water

As we headed off again Aung San said he wanted to try a new route so we disappeared into the jungle to our side and started to climb steepily. Aung San at the front cutting vegetation away while everyone behind tried to keep up and avoid sliding back down the wet jungle terrain. Eventually he conceded that tyhe route was too overgrown so we back tracked and headed up an ever steeper but more clear route before appearing at the top of a rocky hill in the baking hot sun. The heat was becoming unbearable now and I grabbed a pair of spare shorts out of my bag to cover my head as much as I could as I started to worry about heat stroke. As we descended down the other side we heard an explosion somewhere over the next hill and Aung Sang stopped and looked fairly serious for a few moments. We asked if it could be a land mine and he said maybe. Either that or dynamite used for clearing rocks. I think the expression I saw on his face seemed to say it all really that land mines are a very serious and daily occurance in these parts

First morning group break
. There were maps and a big list of restricted areas around Hsipaw back at Lily's and to go this far into the mountains you have to have a guide with you. Another twenty minutes of trekking and yet another explosion went off in the distance. Thankfully that was the last one of the day.

After another couple of hours of trekking higher and higher into the mountains we eventually arrived at the village of Pankam, one of the local Palau villages in this area. It was interesting to find out that they speak a completely different laungage here to the Burmese spoken in Hsipaw a few miles down the road. Not even just local dialect but a completely different language all together.

After a decent lunch, small rest and yet more water for our bags we headed off again. Another hour saw us reach another smaller village and again Aung San explained that this village spoke yet another language compared to the last one. I had read a while ago about how a certain number of languages around the world are disappearing each day, and I couldn't really get my head around it and how that could be possible

View back towards Hsipaw
. This trek made me understand how that is now possible. It only takes small villages like this to be uprooted by governments and 'authorities', with families and the people relocated elsewhere in the country and within a generation they would lose their native language and start speaking Burmese like the majority of the country.

As we were leaving that village I spotted something out of the corner of my eye and took a better look. I was surprised and quietly whispered to Dani "Without looking round have you seen the guy that has started following us with the machine gun?". In true film comedy style she shouted "What!!!?" and spun round quickly to see a guy in full army gear with a nice new machine gun in his hands casually wandering behind us some thrirty yards away. He stayed that distance for a while but then eventually broke off somewhere and disapeared out of sight.

The rest of the day was really pleasant. Still hot, but as the sun had passed it's peak and was getting lower in the sky it became more bearable and the paths we were taking started to level out somewhat so it wasn't constant climbing any more

What a beauty
. We passed some great wildlife as well. Beautiful brighty coloured grass hoppers, birds flying around above us that were bright yellow and red and blue. Cows at the side, graing in the gaps amongst the tea plantations. All very nice indeed.

After around 7 hours treking, god knows how many litres of water each and around 25km covered we finally arrived at Aung San's home village of Htāngsang. Ang what a bonny little village it was as well. Picture postcard stuff on the side of a hill. Swirls of smoke slowly rising up into the trees. Kids darting about and playing. About as rural as it gets I guess. We arrived at Aung San's family home and met his mother and enjoyed a well earned wash down and a beer with some home cooked organic food. They drink tea here...a lot of tea and he explained how there has never been any history of cancer in his village or any of the neighbouring villages and they put it down to tea and the healthy organic food that they eat each day. As we sat around chatting we asked around the government and the guy with the machine gun and the landmines and such like

Pankam village
. Aung San explained how most villages have their own army and that the battles between them and the government are down to land. More precisely the land that is being cultivated to harvest Opium. Basicly land, drugs and money is what it is all about. Every year, both the government and local armies come to his village and demand several young men to join their respective armies. Each and every year the village all has to chip in together, in order to pay off the armies in return for them not taking anyone. Very sad to hear. Also disgustingly saddeing is the fact that landmines are still being set round here on a daily basis. this is the reality of where these people live and work. You could go out to your tea plantation one day and because it is on a route to an opium field you could risk being blown up and killed on your way to work. People think they have problems back home, here it is on a whole other level. Risking death each day to go and pick tea to earn your $1, very very sobering.

By 10pm everyone was shattered

Kids at Pankam
. Even the Spanish couple that looked like some sort of husband and wife Olympic trekking team as they did their cool down stretches. I'm glad it wasn't just me and Dani that had found the days trek really hard going.

Before we knew it we were woken by very loud Myanmar pop music that was being played on some PA system next to Aung San's house. It was 5:30am, and it was very, very loud. Ok, guess we are up for the day then. Breakfast was over by 7am and we were washed and ready to go again. My legs were aching, almost buckling at times as we said our goodbyes to the family and headed off through to the other side of the village.

We stopped at the school at the edge of the village and popped in to see the kids there. They were so sweet and curious. Hanging off you at times. The school has been part funded by a few organisations, Save the children being one of those. If it was not for the help of such groups these villages would really struggle to provide anything for the kids, thankfully they do though and I'm sure they are more fortunate than some kids in many parts of the world who struggle for more than just an education

Me and the chops
. As we gave out the stickers we had brought with us to the teacher (would have been some kind of feeding frensy if we tried to give them individually to each child!) we bid our farewells and headed off back down through the valleys and fields.

The trek down was obviously easier than the trek up, at least in some ways it was. Coming down over all the time though is not really good for blisters and our feet were in agony after an hour. We stopped regularly though and again as we passed another tiny village we had our little machine gun escort for a short way before clearing the village boundary when he slipped off out into a bush somewhere.

the views on the way down were great, headed back towards Hsipaw. Everything laid out in front of us as oppose to having to look back when your ascending. After around 7 hours of treking we hit level ground and the welcome sight of the edge of town. We popped into a small nearby tea shop for a drink, a rest and a bite to eat just in time before the heavens opened and the tropical rain bounced off the ground outside.

A quick Tuk Tuk ride later and we were back at Lily's. Weary, dirty, sweaty but happy and satisfied. The trek had been incredible. Best thing we have done in Myanmar so far and one of the most memorable things on our travels the past few years. Heartbreaking at times to hear about the daily struggles the minority people have to deal with but at least we had given something back to them by putting money in Aung San and his families pocket.

I'm glad we chose the two day trek. Three would have been too much and I doubt I would have coped for another full day in the heat, my legs probably would have given way anyway. It's been a great little taste of rural life in Myanmar and I recommend these treks to anyone who comes here. 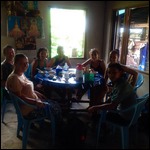