Te King has lost his crown 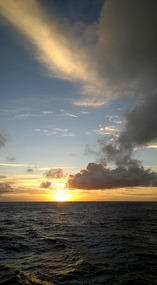 Sunrise approaching Aitutaki
. This was our second visit to the Cook Islands, and Aitutaki, so a grey day would be disappointing but not something that would ruin our holiday.

Somehow the ship anchored on the narrow offshore shelf just outside the reef and then stayed in the same position (presumably using thrusters) all day. Quite amazing. A zodiac landing today due to the depth of the channel and even with plenty of channel markers our zodiac skipper got our ride in wrong in a big way. We scraped our way across the shallow bottom and made it back into the channel.

Te King of Teking Cruises (http://www.tekingtours.com/) was waiting for us. What a funny, and as Al said, sad guy. He had lots going on, least of which was an unscheduled visit to Aitutaki's tiny hospital on the Saturday prior. For that reason he wouldn't be taking us out. We strolled up to the info centre and on the way he told us that the lagoon was really clean due to the recent visit by Cyclone Mike. It had done nothing but wash out a lot of accumulated sediment and algae from the lagoon. Eventually his van came along and in we piled. There was another couple in the van – Mikaela and Peter from the Czech Republic.

At the landing we met Tai (I think?) and his able assistant whose name we never found out. A couple of eskies were loaded onto the boat with us. One of them with food for lunch that included tuna steaks from fish that Teking had only caught that morning 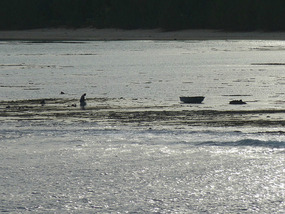 out on the reef at dawn
. Yum, yum! Within a few minutes of leaving the landing we managed to see a turtle and an eagle ray. We went out to Honeymoon Island where Tai’s offsider waded ashore with an esky that I presumed contained our lunch. Then we went back across the lagoon to our first snorkelling spot.

We both agree that it was some of the best snorkelling we’ve ever done. An amazing variety of fish including half a dozen huge trevally and a very, very big Napoleon wrasse. There was also some pretty decent coral and a pretty darn big moray eel. We were given pieces of bread to hold against our chests to draw in the fish. He stressed not to hold it out cos those trevally had big mouths!

Then it was across to the giant clams that were definitely more giant than when we’d been to Aitutaki back in late 2009. 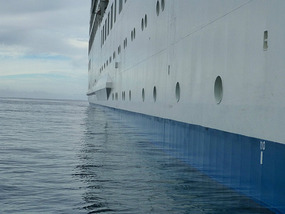 mill pond flat at Aitutaki
. There was a cool stone bbq and next to it an open timber building that had a mezzanine bed platform. Teking had told us about this before we left. You can book it for a night and they come out and set it up with lighting, a mattress, linen and a mossie net. It’d be fantastic on a starry night to sit out there and look up at that amazing sky.

The bbq was on when we got to the camp as the rain came down. All that they needed was for us to say how we wanted our tuna cooked and on it went. I’m from the school of 'sear each side of tuna’ and that’s how mine was served.

By the time lunch was done (gee those Czechs can eat, they went and asked for more and ate all of the doughnuts) the rain had cleared so we set off for One Foot Island. We’d done the passport thing when we were on Aitutaki last time so didn’t bother to bring our new passports with us this time. There’s a small shop where they stamp your passport with a stamp shaped like a foot for NZ$1 (well, it used to be $1) 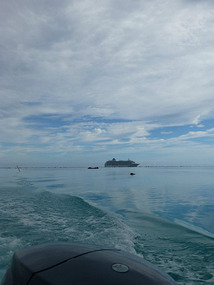 The World outside the reef Aitutaki
. We snorkelled down the channel between the islands. Nothing there, just like last time.

We then travelled down the lagoon to our third and last snorkelling spot (it was supposed to be four stops so not sure what happened to the fourth one). This one was much closer to the edge of the reef where we swam around large ‘platforms’ of purple coral. Hard to explain without seeing them. Just imagine a cake with purple coral icing all around it but not much coral on the top. That’s kind of what they were like. Some nice bright coral and plenty of fish but after that first stop the second two snorkel spots paled into mediocrity.

When we got out of the water Tai took us down to Akaiami Island. This was to see the ruins of the wharf built to service the TEAL Solent flying boats that used to land in the lagoon to refuel. You can actually stay right beside it at Gina’s Akaiami Beach Lodge (http://www.akaiami.net/).

And that was it. Tai went into a bit of a spiel about the flying boats and that was the most he spoke all day.

I’d really been looking forward to today. We’d tried two other Aitutaki lagoon operators on our last trip. We had fantastic days on both previous trips. Teking is the one to go on if Tripadvisor is to be believed but to be honest both of our previous days were better 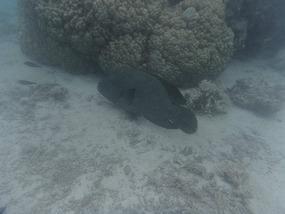 Napolean wrasse
. Both trips had a morning tea stop and both had three snorkelling stops. On one we were taken to the coral farms. Sure the first of today’s snorkelling spot was amazing and the tuna steaks for lunch were delicious. But none of that outweighed the fact that our previous skippers had been more engaging. Tai was a really nice guy but I kinda felt like he’d rather have been fishing. Who would blame him I suppose.

Teking drove us back to the quay. He’s a really nice guy and maybe our day would have been different if he’d skippered the boat. We’ll not know unless we come back to Aitutaki and that might not be for a very long time.

Our new zodiac skipper got us back to the ship safely.

Dinner up by the pool.

When we had been preparing for the trip our friend told us to book a Bali Bed as soon as we came on board. There are four of them at the stern of the ship, giant day beds that they make up as beds so that you can sleep under the stars

The Napolean Wrasse, Aitutaki
. I might have already discussed them. We finally booked it for tonight.

They are ready for you from 9pm but we didn’t go up there until about 10. The other three were made up but no-one was up there. The clouds had cleared so there were plenty of stars but because it was quite brightly lit the stars were hard to see. We ordered a quite delicious cocktail, downed it, and then I apparently laid down and went straight to sleep and of course started snoring. Al said our bedmates eventually joined us around midnight.

When I woke up a bit after midnight the lights were all out and the sky was ablaze. Sadly the wind was also howling and the doona/duvet/quilt kept blowing off me. It was too hot for it in any case. We just needed a sheet that could be tucked in. I eventually tucked the extra blanket (yep, to go with the doona on a 25 degree plus night!) under the edge of the bed and laid it along the edge of the doona to try to keep it from blowing off us. It kind of worked but I had a rubbish night of little sleep. When Al suggested we go back to the room just as the horizon started to light up, I was up and outta there.
Other Entries
-