In search of Atiu coffee

-
Being the gluttons for punishment that we are, we booked bikes again for our day on Rarotonga. The road around Raro is completely flat and pretty much the same distance as Bora Bora – 32 km. 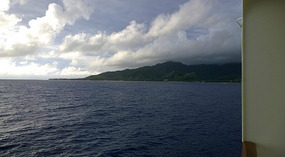 Arriving at Rarotonga
. After we boarded we were surprised that the bikes followed us on, then the usual pier set-up – tent, plant pots, esky, towels etc. We’d anchored at 9. Maybe no-one else had gone ashore?

I’m not sure why we did it, but we decided to ride anti-clockwise. On Raro, where they drive on the same side of the road as us, it meant we weren’t riding on the 'outside’ and needed to cross the road if we wanted to stop by the shore. It hardly mattered, traffic sure ain’t frantic on Raro.

First destination was the Cook Islands Whale & Wildlife Centre (www.cookislandswildlifecentre.com). I love enthusiasm and the lady who runs the centre has it in spades. Best of all she made a mean coffee that we could take into the centre. The whale information was really interesting and it was pretty cool to be able to touch baleen and other pieces of whale skeleton. There was also some coconut crabs, a couple of other tanks with various fish in them but best of all was the stonefish 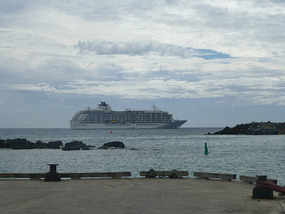 The World off Raro
.

They say good things come to those who wait. I’m not sure it was good for the small fish dropped into the tank but for the stonefish, and us, it was. After quite a long wait that fish swam across the stonefish’s head and literally in a flash it was gone!

We rode along the back of the airport and took a picture of the Gulfstream (http://www.gulfstream.com/products/g450/) that a group of new friends (the 4.30am people!) would be flying home to the States on. Wow.

Then we continued south down the west coast. From an ‘oh my god this place is beautiful’ perspective the weather wasn’t kind to Raro today. Rarotonga is surrounded for the most part by a fringing reef with a very narrow lagoon inside it. On a sunny day it is a gorgeous blue. Today it was overcast so it was just grey and it stayed overcast all day. It was sad for Raro to not be on its best form today. We stopped and had a wander on the beach and thought about a swim but just couldn’t be bothered 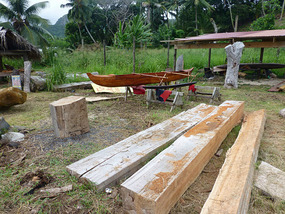 Canoe building next to the Whale Centre
.

Our next destination was Fruits of Rarotonga for one of their famous smoothies. It was as good as we both remembered and the ladies who run the café just as friendly as well. A couple of people we spoke to when we were back on board said the snorkelling wasn’t too bad their either despite the lack of sunshine. We hadn’t taken our gear with us cos we’d snorkelled there before.

It was after 2pm when we finally rode into Muri. We’d only spent a week there back in 2009 and I felt like I was home. I love Raro but I really love Muri. There seemed to be quite a few more places to eat and drink. Sadly though, our container shop was gone L so we continued on to Sails (http://www.sailsrestaurant.co.ck/sails.htm) and had lunch. The container was a gourmet’s paradise – French cheeses, great wines, all sorts of delicious things. Best of all, it was a bakery. Yes, in a shipping container, a bakery that made the best baguettes in the known universe (ok, I might not be able to prove that) and other French pastries 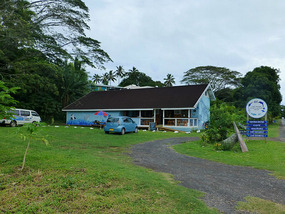 Cook Islands Whale & Wildlife Centre
. We spent quite a bit of money there last visit.

I asked at Sails where it had gone and they said it was in the building across the road from where it had been. Hooray! We also found out that Sails and LBV are owned by the same family. We hadn’t realised that last stay. So after lunch we backtracked a hundred metres and re-visited LBV – Le Bon Vivant (https://www.facebook.com/pages/LBV-Le-Bon-Vivant-Rarotonga-Avarua-Muri-Beach/128698297320859). It had lost its quirky charm in its fancy new home but the baked goods looked just as good. After a great coffee, a fab doughnut and a wicked slice, with a couple of baguettes stuffed into our bag it was time to head back to Avarua.

Sadly the weather turned against us and it rained the whole way back. Our backpacks and backs were covered in dirt thrown up by the back wheel of our bikes. I wanted a shower and some dry clothes but we weren’t done with our bicycle adventure of Raro 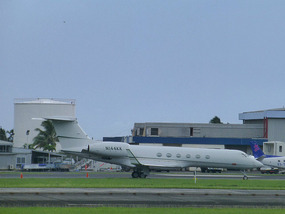 If you've gotta fly this is the way to do it
. Al had one more thing he needed to buy – Atiu coffee. We’d already tried a couple of places. One didn’t have it and one was closed. Al’s last chance was the supermarket. His smile said it all as he came out with two big bags of Atiu coffee beans.

We were very wet and dirty when we stepped on to the tender but had so far had a great day. The roads were smoother than on Bora Bora and the traffic was even slower and more considerate. Even our bums weren’t as numb.

Quick shower and change and we headed back to town for dinner at Trader Jacks (http://www.traderjackscookislands.com/). The rain had nearly cleared so even though we couldn’t get a table in the restaurant we could sit outside at a bench down by the water. To be honest it was much nicer to be sat outside than behind the plastic screens up in the restaurant. We were joined for dinner by our housekeeper Maria and her friend Lisa, another housekeeper from the ship. We had a great time.

The rain came down and the anchor came up. It was fantastic to feel the ship pick up speed as we sailed away. We’d be travelling so slowly but Captain ‘Me again’ obviously had to put the foot down to get us to Tonga on time. A ship going fast feels much better than a ship going about as fast as some people can swim.
Other Entries
-