How much is that hottie under water?

-
The great thing about this ship is that if everyone is on board we sail early. We've done this every time so far. Last night we were due to sail at midnight but we heard the anchors coming up at not that long after 11. It means that the ship can sail just that bit slower to its next port, and of course save fuel. 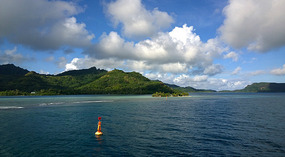 
We were due into Huahine at 9 and I’m pretty sure the anchor was down and the tender was in the water right before 9. Another amazingly gorgeous bay. Pictures will never do these places justice

I’d pre-booked a lagoon tour here as well. Here I’d chosen Huahine Nautique (www.huahine-nautique.com/‎) at USD100 each and it was another great choice.

Marc was waiting for us when we came off the tender and off we went in their Land Rover 'truck’. We drove from Maroe on Huahine Iti across to Huahine Nui and got some great views of The World at anchor in Maroe Bay.

An outboard powered outrigger soon came around the headland and pulled up at the pier where we were greeted by the skipper Parker and Claude. On board were a whole bunch of other people. We think maybe nine, all French. Poor Parker had to say everything twice, once in English and once in French sometimes we got lots of detail, sometimes they
did 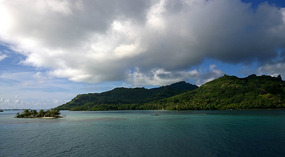 Entering Maroe Bay, Huahine
. He did a great job.

We went for a bit of a scenic cruise past a humungous private yacht called Mayan Queen owned by Mexican billionaire Albert Bailleres. It has six decks and is 92 metres long! Wow.

We then headed through into Maroe Bay and past the ship where we spent a great deal of time trying to explain the concept of The World to everyone after Parker started asking about it. We went up the east coast of Huahine Nui to Faie Bay where we visited Huahine Nui Pearls and Pottery. The pearls were terrifically expensive, as was the pottery. The pottery was beautiful and very unusual. Some is left under water and mother of pearly is ‘grown’ on it. If we hadn’t been so concerned about getting something home we definitely would have bought a piece.

Parker then took us back across the mouth of Maroe Bay to our first snorkelling stop.
The water was a bit murky and the coral not much chop but there was a few fish and it was good to get into the water 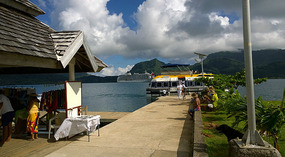 Another great place to cycle around, Huahine
.

One of the ladies on the boat eventually started talking to us and asked where we were from. When we said Australia it caused great mirth amongst everyone, as they thought we were Americans. I'm guessing the French aren't huge fans. Suddenly everyone was all smiles. It was quite odd. The lady worked for the OECD and was amazingly interesting to talk to. She worked with people from all over the world in offices all over the world.

Lunch was on Motu Taiahu (I think). Once the open bar was opened we went and sat down in the water on picnic tables that were in the water! The beer and rum punch flowed freely. There was a young couple on the boat travelling with an older woman who might have been the girl’s grandma, or aunty. She seemed like a chaperone but the young woman came and talked to us and in pretty decent English told us that her husband (so maybe not a chaperone) had worked in Australia for a year 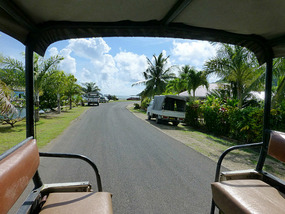 On our way across Huahine Iti
. He was HOT. He came over and started talking about where he’d been and what he’d done. He would have been quite popular at any bar he’d worked at that’s for sure.

Parker made raw fish salad for us. He salted it quite a lot. He explained that the lime and coconut milk was added and then the dish should be served straight away and not allowed to sit. It was delicious. The best we had while we were away and we had it everywhere. We’ve always let the fish soak in the lime juice and coconut milk so we’ll try it his way when we get home. Parker and a couple of locals plus Claude put a great lunch on – bbq, raw fish salad, other salads, baguettes, fresh fruit. Plus the open bar. They even kept us entertained. Hiro’s tour was fun but Marc’s Motu Picnic and Shark tour was seriously good.

And so to the sharks.

Once lunch was over and we’d had time for a decent relax (this is tiring work you know), we climbed back on board the outrigger and headed right around the southern end of Huahine Iti and right up the west coast of both it and Huahine Nui until we came around to the reef somewhere off Fare where we tied up beside a large pontoon 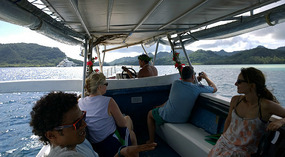 and we're off to explore Huahine
.

As soon as we stepped onto it we could see the sharks, and the rest of the fish.

We both have to say this will be one of those moments we’ll remember for the rest of our lives. With just snorkels on we jumped into the water and moved along a rope anchored just off the pontoon. We kind of all lined up and then Claude joined us and started feeding the sharks.
Watch the videos. At one point I looked up and realised that it was raining really heavily. It looked so cool from under the water.

Claude stayed in the water for quite a while and hotie got back in and went and sat on the bottom and filmed everything up above him with a GoPro. We need one. A GoPro I mean.

I reckon none of us wanted the day to end but eventually it had to.

Room service for dinner looking out across the lagoon.

It just can't get any better.