Those TOP were burning a hole in my wallet 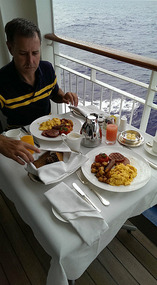 yep, breakfast on the balcony, again
description
. About as round as a cricket/tennis ball not surprisingly

We also took an engine room tour in the afternoon. Fascinating and just something that you can't do on most ships (that I’m aware of). We can also take tours of the bridge, the galley and even the wine cellar! We better get cracking and tick them all off over the next week.

We were alongside in Nuku’alofa and not tendering as the original itinerary had shown. It meant quicker off and later on. Perfect. To get things started (and to give us energy of course) we decided on another room service breakfast.

I’d had trouble finding things to do here so decided to take a ship’s tour – Pangaimotu Island Kayak Adventure. We’ve always hated ship’s tours because they are without exception overpriced. Then there’s the bus full of people who just want to shop and aren’t at all interested in where you’re visiting. Best/worst of all is that half of them decide that they need to go to the toilet just when it’s time to leave.

This was always going to be different. The people who live on The World are the fittest ship 'passengers’ we’ve ever seen. They also wouldn’t put up with rubbish trips. This wasn’t. 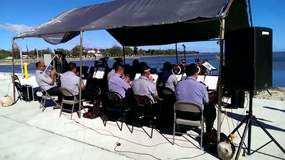 The Tongan Police Band - fantastic, Nuku'alofa
. Along the way we talked to a couple of people who’d been on board the last time that The World had visited Nuku’alofa in 2006.

They said that things seemed a little odd in town. An election had just been held and it was becoming increasingly apparent that people weren’t very happy. When truckloads of people started arriving in town and they were armed with sticks and machetes it was obvious something was wrong. Stuff started getting thrown at businesses. Those that were in town hurried back to the ship. The town centre was pretty much destroyed in the days that followed. The ship couldn’t sail. The gangway was up but the ship itself was tied up. I can’t remember how many days they were stuck here. What an adventure!

Our kayak adventure was much more sedate. It was supposed to be 40 minutes there and 40 back. Thank god it wasn’t. Paddling 25 minutes to the island on a surf kayak was a very long slog but everyone got there 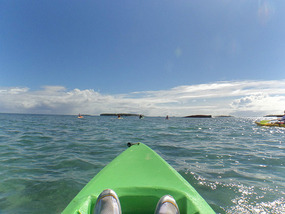 Pangaimotu Island dead ahead
description
. A couple of them must have been bloody Olympians they paddled so fast.

The island itself was pretty cute. I think there might be a backpackers there but we didn’t bother wandering around. We snorkelled around the wrecks just off shore and then sat and chatted to everyone before lunch was served. Along with our Big Mamma beers, we even managed to buy some local coffee.

With the wind behind us the paddle back was supposed to be easier but it had shifted and it was a long way back.

We dumped our stuff back on the ship and headed out to wander around Nuku’alofa. I got very confused at the Westpac ATM when I couldn’t draw any money out. We walked further up the road and tried an ANZ machine and it was smart enough to tell me I was using the wrong PIN. Nong. Cash (not enough as it turned out) in hand we strolled around and ended up in the local market where we bought a few gifts 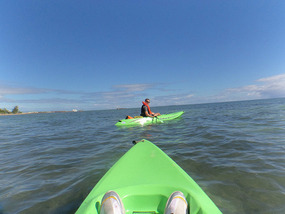 It was 40 minutes but it sure was enough
description
.

Then we went back to the tents that had been set up along the entry to the pier and bought more ‘stuff’, making two more trips to the ATM along the way.

We went into Friends Café (http://www.friendstonga.com/cms/) where we had really good coffees, bought some more coffee beans, and even managed to get a cool gift for my dad.

Across the road was a bar called Reload (https://www.facebook.com/pages/Reload-Bar-Tonga/156057704465308) where we plonked ourselves on stools and had ourselves some Tongan beer called Maka. It was two for TOP10, about $6. Then Al came back with four beers. Hooray, it was happy hour. We checked out the label and found out the bloody beer was made in Auckland, so we switched to Popao a true local beer made by Outrigger Brewery. 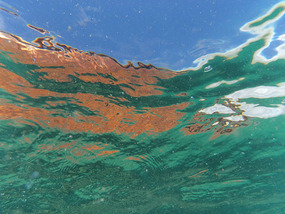 The bow of one of the wrecks from below
description
. And that’s what the menu was - Japanese. Karage, katsu, various noodle dishes, tempura, rice but most importantly fresh sushi and sashimi.

Interesting signs on the doors of the toilets to indicate which was which. The sign on the female loo in particular! Check out the pictures.

There was still some Tongan TOP burning a hole in my wallet so we went back across the road to Friends and bought even more coffee beans and a gift for our wonderful host on the ship. I walked back up the pier with just TOP1 in my wallet. The Tongan economy had done pretty well out of our visit.

Weird anemone thing, mabe
. This time with singing. It was brilliant. We stayed out on the jetty with two residents and it became apparent from the ship’s security guys hovering around us that they wanted us on board so that we could sail. We eventually gave in and as I walked onto the ship I heard them say "that’s everyone". We went up on to deck six so that we could keep listening to the band and to watch the gangway come up. Considering what had been said as we walked on, we were very surprised to see a guest heading down it with one of the staff carrying his bag. He hadn’t noticed what time it was?

The rain pelted down as we did a giant loop off Nuku’alofa and set sail for Norfolk Island.
Other Entries
-