-
I'm not sure what the stats are but I’d reckon that for every cruise that’s supposed to visit Norfolk Island, 50% of them don’t get their passengers ashore. So everything that we’d been sent about Norfolk had a big disclaimer at the top – 'Weather permitting’. The World had tried it last April and it had been too rough but the Captain told us on Friday afternoon that it was looking good for our Saturday visit. 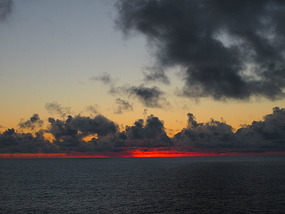 We sailed down the west coast and then turned into Sydney Bay. It was so beautiful. The sun was coming up and what looked like mist was sitting along the shoreline. I suppose it was more spray from the waves breaking on the reef. Whatever it was it looked amazing.

We dropped anchor an hour before schedule at 7am but our hire car wasn’t booked until 9. So we had our coffee and cereal and didn’t walk down to the tender station until close to 9. A zodiac was loading so we hopped onto it and walked ashore right on 9. Silver Mazda Familia registration 557 was sat against the store just as Lou had said it would be. Full day hire - $50 including everything!

And so off we went. We very quickly realised that you are supposed to raise a finger/fingers/hand as you pass another car. That sorted we drove up past the airport and down to the Bumboras 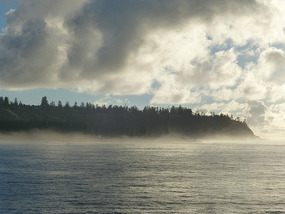 The morning mist rises above Kingston
. The water was astonishingly clear, as was the air now that the mist had gone. An old black dog appeared from nowhere and he wandered along the beach with us.

We made our way around the island stopping at various lookouts and viewing points. Somewhere past Norfolk Blue restaurant we stopped to admire the view and I spotted a huge turtle down in the ocean below. We made our way around to the Captain Cook monument – the road inside the national park was pretty much the best we drove on, the rest are truly shit.

Anson Coffee plantation was next scheduled stop. Sadly it was closed.   We later found out Mr Anson was off the island for a week.

Up Mt Pitt to admire the 60 degree view you get from up there. Inside the national park so another good road all the way up to the top. 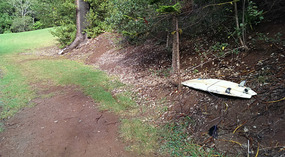 Never lock their cars, never wind their windows up, leave the boards down in park of the beach they surf
description
. Sods law meant that it was open for lunch on any day unless that day was Monday, Tuesday or… Saturday.

So we went into town for lunch. The promise of ‘the best pies on the island’ sucked us right into a café on the edge of Burnt Pine, Norfolk’s main town. Sadly another sign inside gave us the bad news that there were ‘no pies today’. Al’s lasagne and my steak sandwich filled the hardly empty spots in our expanding guts.

Then we drove back down to Kingston to check out the historic buildings Norfolk is famous for. We’d left this a bit late. It was just after 2 when we pulled up at No. 10 Quality Row. As we’d been driving down the hill back into Kingston we saw that the museums all closed at 3. No. 10 was a beautifully restored house built in 1844 but we didn’t have time to dwell. We raced around it, took some pics and raced back out and down the road to try and get a visit to the Commissariat Store as well 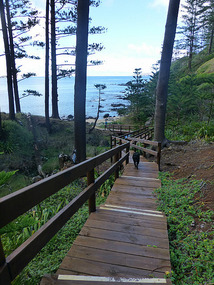 The boardwalk down to Bumboras
. In the door at 2.35. A possibly too long introduction by the lady at the desk meant we had not much more than 15 minutes to look at each of the very interesting displays.

To those of you who visit Norfolk on a ship, plan on visiting them early in your day – they open at 11. Don’t leave it to the last minute like we did. We made a stop at the very poignant cemetery at the end of Quality Row. Way too many headstones for tiny babies and very young children. Some interesting ones of mutinous prisoners.

We drove around to Cascade Bay to have a look at our alternate landing spot – thank goodness we anchored and came ashore at Kingston! Then back to Kingston to have a look at the gaol ruins and drop the car off.

It was about 5.30 as we drove through Burnt Pine. The car was due to be dropped off back down by the quay at 6 so I suggested we get some fish and chips to take down to the shore to eat once we’d parked it.

While I parked the car Al went and asked when the shuttle to and from town was running to. Just finished was the reply. Mmm… go back on board or try and get some dinner. Last tender wasn’t until 7.30 so we had plenty of time. But no way to get to and from town if we leave the car. We drove back up to town and I called Lou from the rental car company and asked if we could drop the car off closer to 7 so that we could have dinner at the bowls club

The World from Bumboras
. Of course we could,

Dinner was pretty ordinary to be honest but it was fun and the lady running the dining room was lovely. We parked the car at about 6.40. As we walked down the pier I overheard a local say "That must be the last two". As we got closer one of the security guys said to us “650 isn’t it?” and when we said yes he was on the radio back to the ship say “last guests coming over now”. Tim the enrichment manager was there and I asked him if last zodiac was 7.30 and he said yes, don’t worry.

We were bundled on to the zodiac at the bottom of the steps as all of the remaining crew piled on to the one behind ours. We could hear the anchors coming up (well, second anchor, the first must have already been up) as we walked into our apartment. Right on 7pm we were underway and sailing out of Sydney Bay. We’d arrived an hour early and leaving the same hour early so Norfolk got their full day from us.

I suppose with the shuttle finishing at 5.30 there was no way for people to stay out in town. Al felt terrible that we’d held the ship up but we hadn’t at all.

We tried to watch another movie but like with everyone so far we made it half way through before I realised Al was asleep and I switched it off.

Another sea day tomorrow then it’ll be New Zealand’s Bay of Islands for our last two days on board the amazing The World.
Other Entries
-