The World comes to an end...

-
We woke up early to another drizzly morning. We were due to dock at 9 and had a car booked to the airport at 12. I couldn't believe we were a few hours from leaving The World. If I could have I would have stayed on, forever. I can understand how people do it after coming on board with the view that I wasn’t sure how people could live on a ship full time. Amazingly packing took no time at all. We’d bought very little apart from kilos of coffee. Anything that MAF might want to see we kept out in our carry-on bags. Nevertheless we had three 20kg cases plus two seven kg carry-on bags. It was a lot of luggage. I had a final wander around and took some more pictures. 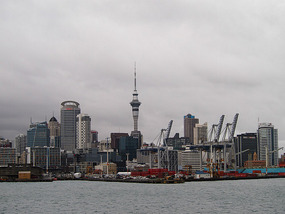 The Auckland skyline
.30 a porter came and took our bags and right on 12, after handing over our ship’s cards, we walked down the gangway for the last time. With that our time on The World had come to an end.

After a bit of confusion we found the driver the ship had booked for us to take us to the airport. We were waiting at one door, and he, and his BMW limo were waiting around the corner at another door. What a way to leave the ship!

The flight to Christchurch was smooth and our rental car waiting for us. It was so tiny – a Suzuki Splash. Lucky there was only two of us – we had to fold the back seats down to put our luggage in. We would have had to do that even if wed only had one bag.

It was like driving home as we headed out to Halswell. This was our third trip to Liz and Tim’s in the last three months. Al’s dad’s had been diagnosed with an aggressive blood cancer in January and had passed only two weeks before we came away on holiday. On more than one occasion over the following few days I looked at my watch thinking that it was time to drive to Papanui to see George.

Pedro’s House of Lamb provided two delicious lamb shoulders for dinner and they were accompanied by the same wines that we’d had at dinner the previous night on the ship.
Other Entries
-