What the hell is out there?

-
We cleared immigration and customs. My hopes of some last minute duty free were dashed as although there was a sign, I couldn't work out how to get to it. Our transport was where it was supposed to be and we were in the van, in Rarotonga, and on our way. 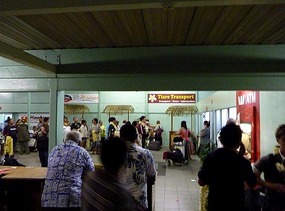 Rarotonga International Airport
. I asked how, but he didn’t explain. We saw nothing of the east coast of the island as we headed to Muri Beach due to the rain and the pitch dark. Dropped two other couples off and finally backed down the drive to Muri Beach Cottages. Mr Driver unlocked the door, switched a light on and handed us the key. Amazingly, the island gods had smiled on us and we had arrived barely three and a half hours late.

First thing we wanted to do was have a look outside. We didn’t care that was still drizzling and that the verandah light wasn’t working so we couldn‘t see anything. It didn’t matter, we could hear the waters of Muri Lagoon lapping against the shore somewhere close below us.

Then it was time to check out the cottage. To be honest, it was small. Ok, it was really small. A little kitchen bench with a small sink and a two burner gas hob with some cupboards and drawers under. A little fridge and microwave were in a nook under the bed platform. Tiny bathroom. A living room that was furnished with a little table and a couple of directors chairs plus a sofa kind of thing. Above the bathroom was the sleeping platform/loft, one of the two reasons we chose this place. Sadly it was also the reason I’m sat typing this in the cottage next door.

I grew up sleeping in a bunk bed. We both thought it would be fun to sleep up on the platform. Sadly the reality was I hated it. The ladder was way too steep. There was no edge rail around the platform. Call me a wuss, but I was scared. There was no way I was going to get up to pee during the night so I just held on until I woke up and it was light.

Back to yesterday.
Other Entries
-