-
We touched down in Auckland at about 5.30 NZ time. Not sure how we made it in just on three hours. The crew had apologised that they were unable to get any info for those of us who were transferring to either international or domestic flights. For us with international connections we were told to go to the transit desk but we couldn't see the point as our bag had only been tagged to Auckland. So we went down, grabbed our bag and headed to the Air NZ customer service counter. We must have surprised the guy manning the counter because he seemed mighty confused when we told him we were on NZ14 to Raro but had missed it. A quick phone call and we were being escorted into the Koro Club (like The Qantas Club). As we were walking he explained the flight hadn’t left but we had to hurry. 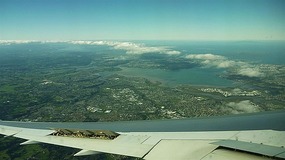 Auckland here we come
. When we went through immigration they looked at us and asked why we’d only be staying one night. Now that we were going to make our flight we had to fill in departure cards. Length of stay in NZ? 0 days. "Why’s that?" we were asked and went through the Air NZ delayed flight saga. We were back into the terminal just after 6pm and literally ran to the gate. The boards showed the flight was boarding and was due to depart at 6.30pm. So we ran straight passed the duty free shops and missed our last chance for cheap booze.

Wished we hadn’t run, or at least had paused to buy booze then run again, because we didn’t even board until after 6.30. More delays with paperwork saw us off just after 7pm.

Another smooth flight in another newish 767. This flight was going on to LA so now there would be new lot of people who would be staring down the barrel of missing their connecting flights in LA.

Dinner was a delicious venison pie. Could have had two. The captain let us know that the weather in Raro wasn’t that flash and he was right. Luckily we were in the converted shipping container that was the entry to the arrivals hall when the heavens opened again.

I forgot to mention that there was an Australia sporting team with us on the flight. They were heading to Raro to represent Australia in mixed (?) netball. For those of you who have played mixed netball I have a question. Were there quite a lot of gay guys playing? If not, then some of those young (and quite good looking) guys were doing very good jobs of imitating them. One of the chaperones put Julian Cleary to shame. But I digress…
Other Entries
-