A Day in Dubai

-
After a very short three and a half hour flight, we made it into Dubai. This was my first time to the Middle East and I was very excited to be able to go and explore the city. Jaime was in Dubai about 12 years ago or so when he was in the Marines, and he was excited to see how it has changed since then.
Going through customs at the airport was an absolute breeze 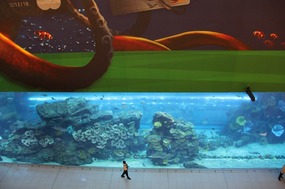 Part of the Aquarium at the Dubai Mall
. There was an express line for citizens of certain foreign countries, and lucky for us, the US was one of them! It took about 5 minutes to get through! Incredible!

We took the Metro from the airport to the Dubai Mall. We wanted some quick cheap food, and also were hoping to catch a bus tour from here. The public transportation in Dubai is crazy cheap, and super easy to follow. Also very clean. It was quite a shock to go from where we were in India to this place. Vast difference in cleanliness.

We get to the Dubai Mall - The LARGEST mall in the entire world!! (Can check that one off my list!) We go straight to the food court, which also has to be that largest food court in the world. It was a bit overwhelming walking through and trying to decide what to eat, but Jaime went for Lebanese food and I went for Thai food. They had Indian food options, but we were alright being done with that for a while.

This mall is incredible 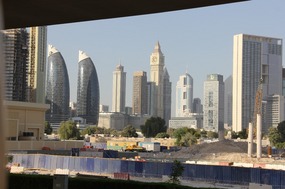 One view of the skyline
. Some of their stores had live models in the windows instead of mannequins, it had a large aquarium, several food courts, and any store you could ever dream of from high end Tiffany's, to lower end H & M. There were definitely a lot of tourists here, but also a lot of locals.

We finally found the place to sign up for the bus tour, which was a hop-on hop-off sort of deal. We got two ticket and hopped on the bus which took us for a ride around the different parts of the city.

When we got to the beach of the Arabian Gulf, Jaime and I decided to step out and take a stroll on the beach and attempt to get some photos of the Burj Al Arab 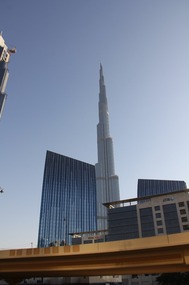 The Burj Khalifa towers over the other buildings
. This is the famous building that looks like a sailboat. Also famous because apparently it is rated as a six star hotel, even though hotel ratings only go up to 5 stars. Talk about fancy.

We took off our shoes and put our feetsies in the Arabian Gulf, got a few pics, and walked over to get some photos of the Burj Al Arab. We were both pretty thirsty, so on the little road out to the main road, there was a tiny hole-in-the-wall grocery store. Jaime walked over to get some waters, but had to stop to put his shoes back on. I had flip flops, so I walked over and went in the store to grab the waters really quick. When I came out, Jaime was looking at this car, and I was like "what's up?" He said "Um, that is Jay-Z in that car right there." I was like "No, it is not." But lo and behold, the grocery store manager comes out and hands a few waters to him in the car, and he looked up and it was totally Jay-Z. He was on his cell phone and driving, so we didn't go up to him or anything, but before he drove away, Jaime yelled out, "Hey Jigga!" (which is his nickname) and he looked up and waved, then drove away. Jaime was super stoked he saw him because he likes Jay-Z a lot.

**For those of you who do not know, Jay-Z is a very famous rapper. He is married to Beyoncé.

On our tour, our guide told us that a lot of celebrities buy property, and even islands out here in Dubai 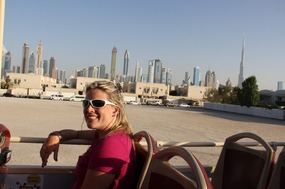 On the bus!
. We can only imagine Jay-Z was heading to one of those. It is funny because on our tour group in India, everybody asked us if we saw celebrities often because we go to Hollywood/Los Angeles so much. And we were like, no, we rarely see them out and about, when we see them it is because we go to an event or something. Then we see freaking Jay-Z in Dubai. Pretty crazy.

Anyways, we went to the next bus stop to 'hop' back on. It was getting dark at this point, and the bus was going pretty fast, so we didn't get too many great pictures of the skylines at night, but we did drive out onto the Palm, a man-made group of islands that have residences, hotels, and the famous Atlantis resort, Dubai. These islands are shaped like Palm. Hence, the name. 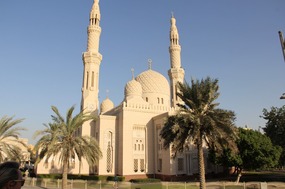 One of the most visited Mosques in Dubai
. It was cool, but the Bellagio's show is a little better. ;)

Then it was time to go up the Burj Khalifa - the tallest building in the world. The building itself is 550 meters tall, and you are able to go up to the 148th story. (To put it in perspective - the Willis Tower, or Sears Tower in Chicago is only 108 stories) We are super excited we did this at night, because the views of the Dubai skyline from that far up with all the night time city lights was indescribable.

We were able to walk all the way around the building to see several different views of the entire city. There was even an outdoor area, which was even more magnificent. The air up there felt amazing. We were just about to head back down when the workers told us the water show was happening again, so we got to see another water show from 148 stories up. I said before the Bellagio water show was better, but the view from above was way better than anything we had ever seen 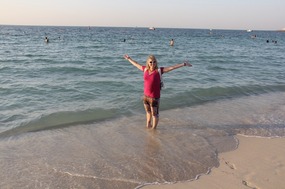 There were actually two more floors we were able to explore - the 125th floor and the 124th floor. These were just extra places you look out more windows, and they had photo booth ops where they would photo shop you into different parts of the building, like you could look like you were scaling the building from the outside. Sounds pretty cool, right? Well, here is a funny story for ya.


When Jaime and I got down to the 125th floor, some of the workers had us come over to pose for some pictures. They did a really funny one of us where it looks like Jaime is falling off the building and I am holding onto him, and we both look scared. Kinda cheesy, but super funny. So we asked how much it was to buy to it, and the lady said $240 Durham. Jaime looked a little surprised, but I was like, hell, yes, let's get it! So Jaime gives them the cash and we take the picture. I took out my calculator from my phone and did the coverstion real quick to see how much we spent for the photo 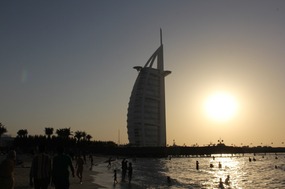 The Burj Al Arab at sunset
. I should have done this before we agreed because the photo price converted into $65 US!!


**Quick conversion lesson: About $3.5 Durham equals $1 US. I was still thinking in my head Indian Rupees which is about $65 Rupees to $1 US. That is quite the big difference. I was thinking this photo was about $4 US, but I was way off!!!

So I told Jaime that I was sorry, I didn't realize it was so much, and he said he thought that seemed really steep, but I looked so excited to get the photo that he just bought it anyways. But we talked it out and decided that was outrageous for a silly souvenir photo. $20 US would have been outrageous, ha ha. We went up to the ladies who we bought it from and told them the truth, that we didn't convert it right, weren't prepared to spend that much, and if we could please get a refund. They gave it to us no problem. Whew! That was a relief! That extra money we got back came in handy later at the airport, I will tell you about that later

Selfie on the beach!
. We felt kind of stupid asking for our money back, but it was worth it.

We were able to hang out on the 124th floor for a bit, but by that time we were very tired, and ready to head back to the airport. We checked out a few more stores in the mall. Which stays open until midnight! Then we caught a cab to the airport.

If I can stress one more time how awesome Emirates Airlines is....We were each given a meal voucher for the airport at no additional charge since our layover was so dang long. That was pretty sweet to get a free meal.

When we got to the airport, we were tired, stinky, and ready to just get on the plane already, but we still had about 7 hours before our flight would board. However, luckily we found this spa that was part of a hotel in the airport, and both got massages. Nice, clean, professional, relaxing, amazing spa massages. They even let us use their showers, which had three different water spouts, and perfect hot water 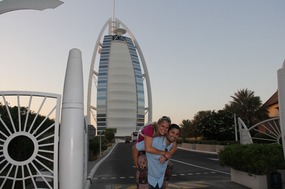 Our classic pose on front of the Burj Al Arab
. Just what we needed for the long flight home.

We were lucky enough to find an open row in the very back of the plane, which we moved to because our area was quite crowded and had about 5 infants within 5 rows of our original assigned seats. We have nothing against people who have children or who have to fly with them, but we needed sleep, and that many crying babies would have made our long flight even longer, so we just moved. It was so quite and calm in the back of the plane, we both got plenty of sleep. The flight went by fast, the meals were great, we got a couple of movies in, and by the time we landed at LAX, we were more than ready to be home.

Dubai was amazing, Jaime and I were even saying that except for the outrageously hot summers, we could totally live there! So beautiful and so much to do! But don't worry, we will not be moving there any time soon. No way could we afford it. But we did learn a valuable lesson and that is to have your long layover at the START of your trip, because no matter how exciting a place is, when you are on your way home, you are just ready to be home. Which we were. Either way, so great to experience this country. We definitely want to go back.