Oklahoma was not exciting, but 50 States is!! 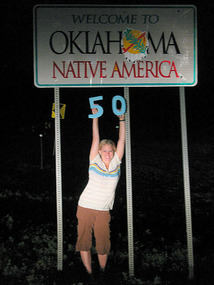 Fifty!!
....I know there are a LOT of things to do in Oklahoma, and I know where I stayed was probably not a true reflection of the whole state, but Boise City was not too exciting. What was exciting was the fact that being in Oklahoma meant that I have officially been to all 50 states!! That was my other goal to accomplish before hitting 30! (the other was skydiving - got that done too!)

Because there were so many other things we wanted to accomplish on this short 6 night road trip, our Oklahoma stop was pretty much just that - a stop. We stayed in a little roadside inn - one that too closely reminded us of the Bates Motel from Psycho. Since this was a border town, there was no nightlife or nothing to do, so once we got to the hotel, we got Subway (the only thing open at the time) and watched TV as we fell asleep.

I was able to get my picture next to the sign and that was the main thing I wanted to do. After further researching Oklahoma, there are several things I would be interested in doing if I ever get the chance to pass through again. (4-wheeling in Little Sahara, for example) But again, this was more or less just so I could make it to my 50th state. We did, however get to eat at a nice little local diner for breakfast on our way out. Complete with cowboys carrying in their guns. That is exactly how I pictured Oklahoma.

I think I said this before that it is not the destination that matters, but the journey, and we had a lot of fun on the way there, and there is only more fun to come on our way back.