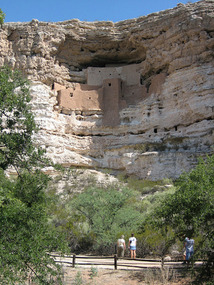 But on the other hand, time difference/jet-lag is great – up early and off for a day out! We set off for Montezuma's Castle, an ancient Sinagua ruin set into a cliff face. I had worked out that we could save ourselves quite a lot of money by buying an annual pass to National Parks & Monuments, so we spent $80 on one which would cover us for most of our parks/monuments entry & parking. 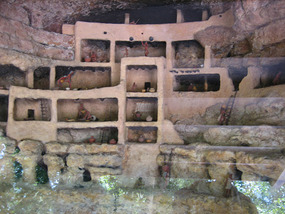 The Sinagua people built their cliff dwellings over 300 years, starting in 1100AD; they must have been skilled builders and engineers as their "high-rise apartment building" spans 5 storeys which they accessed (& defended) with portable ladders. A model shows what it would have looked like, but the actual dwellings are really atmospheric. They sit high above the Verde River, where there are walking trails with desert plants and we enjoyed our time there. 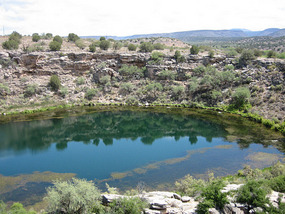 The heat was now really ramping up, but our next stop was the adjacent Montezuma’s Well, a large natural sinkhole with a spring in the bottom, where we walked the trail viewing the plants, lizards, the well and a thousand year old irrigation channel which still works. It was far too hot at 33°C to keep walking, so we rejoined the RV and enjoyed the aircon on the way to Sedona. 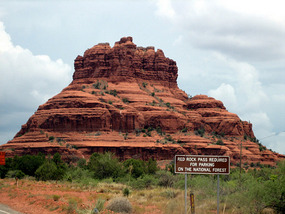 This was heaven for me – bright red weathered rocks everywhere! We parked at Bell Rock and braved the heat so I could walk among them; I don’t know what it is about red rocks which attracts me so much, but every time we turned a corner there was yet another vista for me to Wow at. We eventually gasped our way back to the RV for cooling drinks, then went to have a look at the town. It is certainly attractive, obviously the home of the rather well-to-do, but there was nowhere to park a 29 ft RV and all the roads seemed to have roadworks, so we abandoned that idea and went to Slide Rock State Park for lunch. 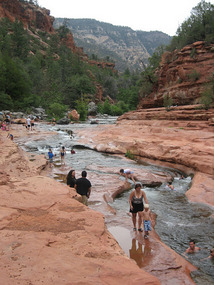 It is exactly as the name suggests – a natural river full of rocks to slide on and deep pools to jump into; the weather however had turned the hot tap off and was now cloudy and much cooler, so we didn’t join the hordes of sliding children and ate our sandwiches on a rock watching them. The tap had started to drip with rain so we drove on to Cottonwood, a nice old town and the access point for Tuzigoot National Monument – more Sinagua dwellings but this time perched on top of a hill. 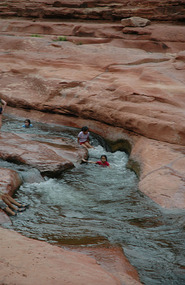 There were great views down the Verde Valley and across to the hills at Jerome with its huge J carved into the hillside, and there would have been even more views behind the clouds, but we wandered the ruins (in the rain) then descended to the largest, most remote Walmart I have ever seen – 72 checkouts with aisles like roadways and where the customer service people zoomed around on roller blades. We gave up trying to find the charcoal and approached a gentleman NOT on roller blades for help. In conversation we discovered that he was retired from the US Navy and was working there for interest; even more amazingly, his son lives 8 miles from us at home and he had visited a windmill only 2 miles from our house. What a small world it is.

It was STILL raining, so we returned to the site for tea – it finally stopped, so we used our new charcoal and had a very nice bbq under the newly repaired awning.
Other Entries
-