-
On the road early (well done jet-lag) and off towards the Grand Canyon, our destination for tonight; we were advised to book early if we wanted to guarantee a pitch at Trailer Village which sits near the edge of the South Rim, so we’d reserved a spot several months ago. 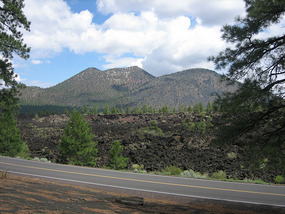 We bypassed Flagstaff and continued on to Sunset Crater, the collapsed cone of one of San Fransisco Peak’s volcanoes. Lava flows being my second love after red rocks, I was really looking forward to seeing the contrast between Sunset (named because of the colours of its rocks) and the black/grey shapes of the lava. 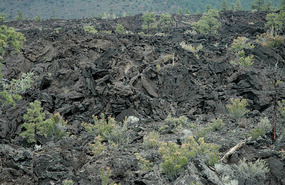 Climbing up to the crater is no longer allowed due to damage from hikers, so we went up to the summit of Lennox Crater opposite and looked down on Sunset – what we could see through the trees was very impressive and scenic. We also walked on the huge lava field (slightly disappointing as it was mostly cinders) then continued on the loop road with its beautiful views of the Painted Desert. 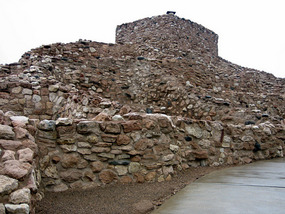 Next was Wupatki, another Sinaguan ruin but a beautiful one, and where the Sinaguan people fled when Sunset Crater erupted. They built Wupatki (meaning “tall house”) with 100 rooms but also had a ball court like the ones in Central America; these ruins sit on & around a rocky outcrop along with more pueblo ruins called Citadel and Wukoki along with a natural blowhole which vented cool air – aircon circa 1200AD! 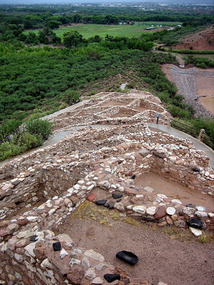 Wupatki from the top

The site is very extensive, spanning around 35,000 acres, but needless to say we didn’t walk them all. The whole thing is very atmospheric: pueblos of glowing red stone set against the deep blue of the sky and the faint traces of green in the waving grasses. Members of the ancient Pueblo People still return to visit the spirit ancestors they believe guard the site. 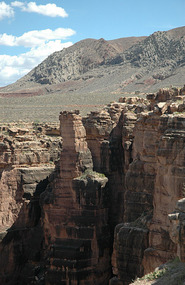 It was time to head off to the Grand Canyon, a place we first visited in 1997 just for the day and one we were keen to see again. We approached from the East Rim Drive and stopped at the Little Colorado overlook to see the native jewellery stalls there. What a place to spend the day selling your wares – fantastic views of the canyon and also great jewellery; I bought a couple of Navajo-style necklaces. 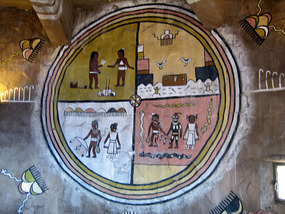 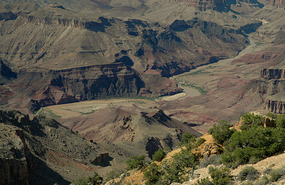 
It was $25 to enter the National Park (our pass was great value: $80 for the year and we’d already spent nearly $50 in 2 days), stopping at various viewpoints including the Desert View.
We climbed the tower, pausing at all the little windows on the way to the top where we had great views of the Colorado River; it looked huge but was actually more than a mile away, setting the scene for the grandeur of the deepest part of the canyon. 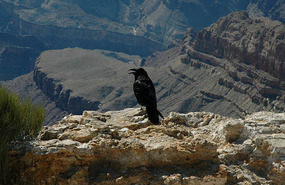 We checked into Trailer Village, a large site full of pull-thrus which are a delight with a 29ft vehicle! Pitches were in staggered rows, all gravel hard standing with full services and a personal bbq on a stand, but the site had poor TV reception and no phone signal at all. The camp is on a bus loop to which you have free access, so we got a lift into Canyon Village then hopped on the (also free) red route bus west to Hopi Point to see the sun set over the canyon. 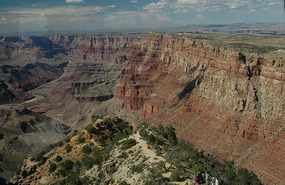 The skies looked impressive with wonderful changing colours but we couldn’t see the sun actually set due to the cloud cover. We got the bus back to the RV then walked through the woods to Mather Point on the rim for a ranger talk on the moon and stars. I was looking forward to an astronomical evening, but we stood around for over 40 mins (not dark enough?) then simply listened to legends featuring the moon....disappointing! We were then supposed to do a 3 mile hike but we’d had enough of standing around so we walked back to the van through the woods, where the moonlight was so bright we didn’t even need our torches.