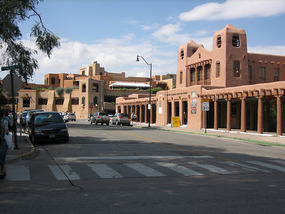 It was a lovely sunny morning and our intention was to visit Bandelier National Monument, a canyon with cave dwellings (lots of ruins this holiday!) but we diverted ourselves to have a look at Santa Fe first. The town is very attractive, all the buildings being 1-2 storey adobes with rounded corners and painted in typical desert colours. 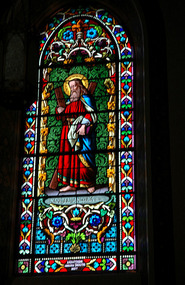 We were shocked at having to pay $10 to park, but I suppose a 29ft vehicle does take quite a lot of room up. The car park was behind the cathedral of St Joseph of Assisi so we popped in for a look, and what a beautiful place it was: lovely stained glass windows and very modern paintings with a very tranquil atmosphere. 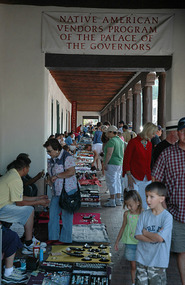 We walked into town through the graveyard and discovered plaques there describing the history of the town, which is built round a central square with palisades. Jewellery, pottery and fine art stalls sat cheek-by-jowl under these so we wandered amongst them, gazing into the hidden courtyards behind. But the countryside was calling as it always does, so we drove on to Bandelier. 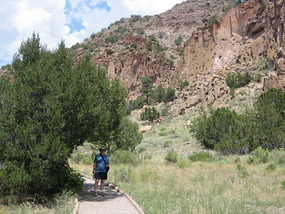 This National Monument encompasses 33,000 acres of canyons, mesas and dwellings – needless to say, we didn't visit them all. Once again we watched the Visitor Centre film about Ancient Puebloans (quite the experts now) then set off on the 1.2mile trail to see just a sample. It was a lovely walk, rather hot but amongst such lovely scenery we didn’t mind. 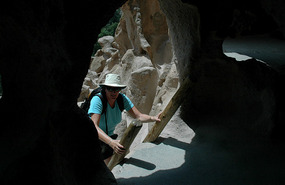 I'm escaping to my cavate...

The main village is a huge circular ruin but we were surprised to see how tiny all the rooms were – about 5x7ft at the most; archaeologists were digging at the extremities and it looked as though there is still a lot more to be uncovered. We continued along the path to the cliff dwellings, marvelling at how these ancient peoples excavated their rooms from the tufa. They are not caves but cavates, and were accessed by ladders: the rangers had reconstructed some, so up I hopped. Great view, and you can only come in if I let you up my ladder! 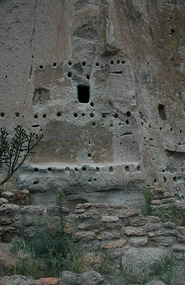 We walked along to the Long House, which was REALLY long – 800 rooms built along and supported by the cliff, with post-holes for rafters at several levels showing that they were at least 3 storeys high. It was incredible to think that all this had been built around 1150 AD with the primitive tools available to them at that time, and rather sad to find that the whole place was abandoned by 1600 as the Puebloans moved towards the Rio Grande river. 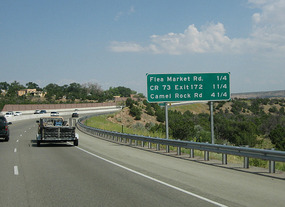 Just for a change a rainstorm started during the afternoon and we got absolutely soaked, but soon dried off in the RV and headed off towards Los Alamos along the pretty route along Hwy 4. Hubby has always been interested in all things nuclear, and as Los Alamos was the home of the bomb it seemed the logical place to go. It is a huge research facility, doing national security science which is still ongoing, so we were stopped as we approached the guarded gate. We were questioned and our RV was searched by a soldier who turned out to be a veteran of the Iraq War and was very friendly. Cleared for entry (phew), we drove into the complex and parked so we could visit the Bradbury Science Museum which is the window into the laboratory.

It is full of info about the nuclear programme, and has excellent displays and films about its history. Many of the displays were hands-on and we found the whole place fascinating. Hubby liked all the technical and scientific things while I enjoyed the history and the human stories of the workers – the race to build the first atomic bomb during the Manhattan project in the 1940s when the scientists (and other workers, including secretaries) were sequestered in secret at Los Alamos. It was a great afternoon, and even better, completely free.

We continued on our way down Hwy 4 through the Jemez Mountains, a very pretty route which led us through Valles Caldera National Preserve, the huge grassy floor of an ancient caldera where we were lucky enough to see a herd of elk grazing. Next came Jemez Springs and many red rocks – still my favourite view. Down towards Albuquerque we had more rain which sadly blotted out the views of the Sandia Mountains, but we did see 3 rainbows, including one on the road in front of us. Our pot of gold turned out to be at Tijeras in the form of Turquoise Trail RV Park in, a very nice place with museum pieces in Reception and noteworthy for the fact that the restrooms had curtains instead of doors on the showers and toilets....
Other Entries
-