-
We were feeling the lack of connectivity and needed to keep in touch with home, so we headed for the local library to use the computers. I spent ages filling in forms to join the library as the only way the computers would work was with a library card inserted, but it was worth it for free access – we had a nice chat with the very friendly librarian & locals which quite made me wish we were staying longer. 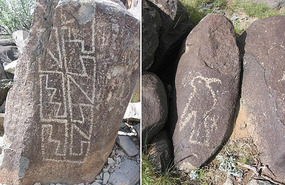 By 11am we were on the road again, along a not particularly scenic road but one with a very smooth surface, which is always good in an RV. We stopped at a picnic site near Carrizozo for a late lunch then continued on our way to Three Rivers Petroglyphs. It was an amazing area with a self-guided trail over 2 small hills with literally thousands of carvings (supposedly 21,00 in all) using the booklet from the entrance – great value at $3 each but contained within our pass so "free". 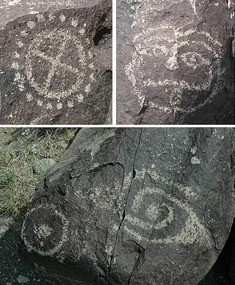 The day had warmed up to be extremely hot, so we stopped lots of times to have a drink and take photos. The farming Mogollon people created all the rock carvings between 1100 & 1400 AD and they were superb: birds, animals, faces and intricate patterns all featured in great numbers over the 1 mile trail – if you go, wear good shoes as the path is very rocky and there are snakes, although we didn't see one. 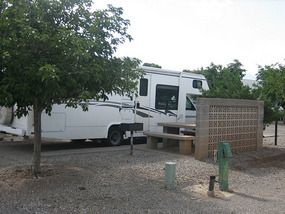 Our intended destination was Alamogordo, the town which serves as the gateway to White Sands NP. It was here at the Trinity site that the first testing of the atomic bomb was done, but as its only open for one day in April each year we couldn’t visit the actual site. We were keen to see the area with its wonderful dunes, so we checked into the Roadrunner RV Resort, a very nice site with an extremely knowledgeable and helpful owner who told us all about the area. He even recommended a site near Carlsbad where we hoped to go in a few days. It was still very hot so we went for a swim in the pool and were the only ones there – it pays to be English and out in the summer sun when all sensible Americans are tucked inside with their air-con! 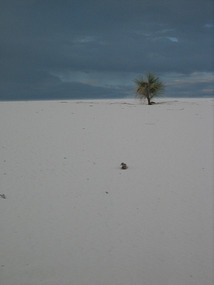 After a quick snack we set off for White Sands and by accident arrived just in time for a Sunset Stroll With A Ranger. We did the 1 hour trail & talk barefoot on the soft velvety sand, and found it to be an amazing place with great dunes, but were surprised at how much vegetation was growing on those near the entrance. Further in, the vegetation decreased markedly and underfoot turned into bright white gypsum – this is the largest gypsum field in the world. It was strange to be walking barefoot on sand which didn’t burn the soles of our feet (a facet of gypsum as opposed to quartz-based sand) but where water had collected and mixed with the gypsum it was more like walking on concrete.

It was a very interesting stroll and we learned a lot about the dunes and their plants: I was fascinated by the huge pedestals made by Stinkwood Sumacs and the long upward-leaning stems of the Soapstone Yuccas. We eventually returned to the van then drove to the Amphitheatre for a Star Talk – hopefully this would be better than the one at the Grand Canyon. 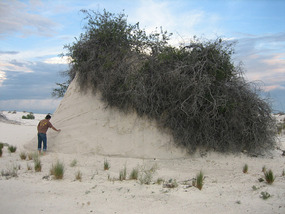 We took our chairs to sit on as we had to wait for darkness to fall and for our eyes to adapt: there was a talk by a guest presenter about dark skies and light pollution which started well and had an interesting slide show, but it went on FAR too long at nearly an hour and her voice alone was enough to send anyone to sleep. Half the people gave up and left, but we stuck it out – mind you, Hubby spent most of the time looking at the darkening skies and emerging stars through his binoculars! 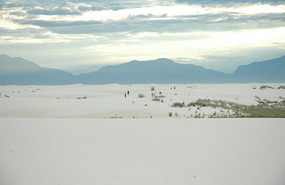 The empty vastness of gypsum

The ranger finally got her to stop droning on and declared the darkness good enough; as WSNP is literally in the middle of nowhere, there is no light pollution at all which made for very interesting viewing. The ranger was most interesting (a real contrast to his guest) and showed us Venus and 3 different satellites passing overhead, then encouraged us to lie on our backs and just gaze at the sky. He pointed out the constellations with a very strong pencil beam torch, an amazing device which seemed to touch the stars; he explained the legends associated with them, and allowed us time to look at the stars through our binoculars. If we thought there were a lot of stars visible to the naked eye, we rethought our estimates when using binoculars – literally millions were now visible and it was a wonderful sight to behold. It made me feel very small and insignificant, but very privileged to view it. THIS was what I had hoped for at the Grand Canyon, and White Sands delivered it in spades.

It was 10pm by now and we’d had no tea, so we went into Alamogordo and got a McDonalds to take back to the site – tea at 10.45pm.
Other Entries
-