Today started in Walmart with some shopping followed by a trip to Subway to get some sandwiches for lunch: I ordered and was told, "$10.66 please", whereon the guy next to me, obviously having picked up the English accent said, “1066? Battle of Hastings.” I was flabbergasted that here I was in the middle of nowhere in southern New Mexico and the locals know the date of said battle, really only relevant to English people. Wow. 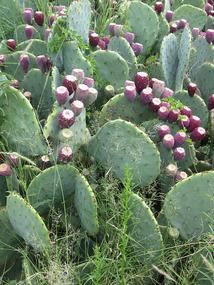 Having recovered my wits, we set off to drive the 25 miles to Carlsbad Caverns; I had wanted to visit here ever since I saw a documentary about the caves, far bigger than any we have experienced anywhere in Europe. It was a nice drive up the park road, but the VC was being refurbished so everything was in trailers in the car park. We paid $6 each to get in (but “free” because of our pass) then booked onto the King's Palace tour for 3pm, the first availability. 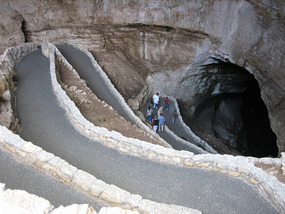 We spent the morning in the free part of the complex, starting by descending through the Natural Entrance: we rejected the elevator and walked 750 ft down a paved spiral path into the mouth of the cave. We had hired an audio guide each which proved to be well worth it – clear descriptions of the history of the caves plus the many formations we saw on the way in. It was very deep and steep and there were cave swallows flying everywhere, then we arrived at the Rest Area at the bottom – a HUGE cafeteria with seating for what looked like hundreds of people, souvenir stalls and restrooms, all at 750ft underground. 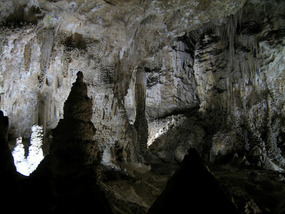 The next hour was spent touring the Big Room: this was just awesome, an enormous cavern which went on and on and on to the size of 14 football fields, with enormous columns and stalactites plus tiny ones, all shining with different colours. The audio guides described everything really well and we spent the time just saying, “Wow!”

We strolled back up to the surface to meet up with our ranger guide for the King’s Palace tour – we had considered not doing the tour as we were nearly “caved” to death, but are so glad we did. There were amazing formations everywhere and all equally fantastic: the King’s Room with its castle-like formation in the centre, the Queen’s Chamber where you sit in total darkness for 2 or 3 minutes replicating the circumstances of its discovery, the Papoose Room and Green Lake Room, named for the deep malachite-coloured pool in the corner. 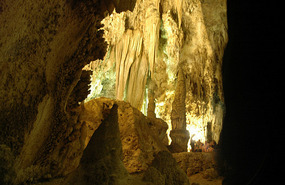 The return to the surface was thankfully by elevator (legs were giving out by now) where we found the weather to be overcast but very warm – we had no idea what was happening in the outside world whilst we were in the Scenic Rooms. Continuing our late meal timetable, we had lunch at 4.40pm then had a rest and read our books while we waited for dusk and the chance to see the bat flight out of the cave. There was a 50 mile round trip out of the park to do the Nature Loop which we considered doing, but it was closed to RVs and I don’t think our feet would have stood another 6 mile walk.

At 7.15 we went down to the amphitheatre at the Natural Entrance, a semi-circular set of stone seats facing the cave. A ranger gave us a very interesting presentation about the Mexican Long Tailed bats which inhabit the cave system – they are tiny creatures which would fit into a closed fist, but 300,000 of them roost in the caves during the day then emerge at dusk to go feeding. It was absolutely amazing to see them fly out: they look like a dark spinning cloud as they start out of the cave with an anti-clockwise spiral to gain height, then fly 45 miles to the Pecos River to feed on the insects there and return towards dawn.

Unfortunately the light levels were far too low for photos, but we sat and watched the endless bat-clouds for another 30 minutes until it was too dark to see any more, then drove back to the camp site reminiscing about all the wonderful things we had seen during the day.
Other Entries
-