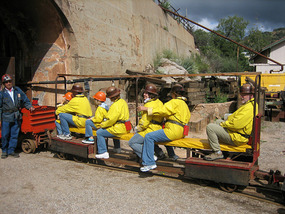 The little site had very nice showers, so we used them (much better than having steam all through the RV all day) then did the 9am tour of the Queen "show" mine next door. It was a very interesting tour, starting with being fitted with bright yellow slickers plus a hard hat, battery pack and lamp, then we sat astride a little railcar to get into the mine. 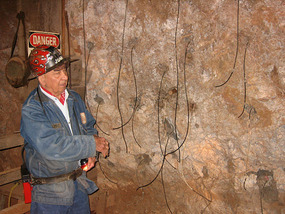 We stopped at various points along the way to look at the machinery, ores etc where descriptions were given by our guide, Juan, an ex-miner who now did visitor tours. He was very humorous and knowledgeable, describing his working life to us and contrasting that with the Victorian era miners whose tools we saw. We rode 1300 ft into the mountain (not recommended for claustrophobics) – I have great admiration for anyone who works in those environments as any more than the hour we spent there would do me in. 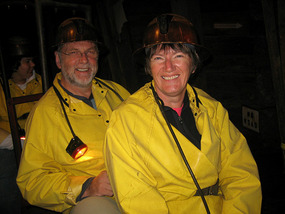 Once we'd regained the outside, we wandered round the museum then returned to camp, all of 50 yards away. The owner was still nowhere to be seen so we unhooked, posted the fee of $20 through his letterbox and set off up Hwy 80 to Tombstone. 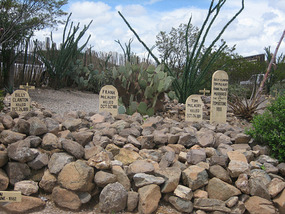 We stopped at Boothill Cemetery, the final resting place of many of the participants of the Gunfight at the OK Corral, to walk round the grave markers: buried here are outlaws with their victims, suicides and hangings, (legal and otherwise), along with citizens and the refined element of Tombstone's first days. The graveyard had fallen into disrepair with many markers being stolen, so the townspeople have researched and replaced them. 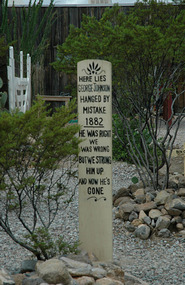 
It was a very interesting place to visit and to note the names we knew from cowboy films, including Frank McLaury & the Clanton brothers, victims of the OK Corral, plus countless others, most with the method of their death inscribed on their marker. Lynching, suicide, hanging - all are represented there. One which really struck me was very sad: “Here lies George Johnson, Hanged by mistake, 1882. He was right, we was wrong, but we strung him up and now he's gone." 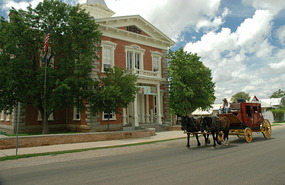 We continued on into the town of Tombstone and parked up to visit the Courthouse; it is the original building which is now a museum and was very informative and interesting. As we walked up the main street, (closed to traffic) we remarked how authentic it all looked, with historic buildings lining the sides and the tarmac covered with dirt. 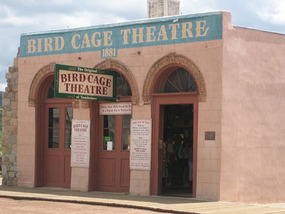 The buildings, including the Birdcage Theatre, Silver Nugget saloon, Big Nose Kate’s saloon and Crystal Palace look attractive, having been sympathetically renovated, and the stagecoach even came past, but filled with tourists not outlaws. As we’d seen a mock gunfight before, we decided not to go to the show in the OK Corral but set off for the great outdoors in the form of the San Pedro Riparian Conservation Area, a bird watching area near Sierra Vista. 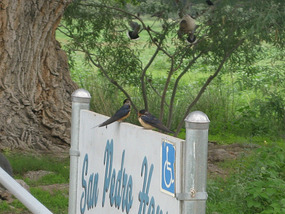 The 1 mile walking loop from the Visitor Centre was very interesting, with a huge variety of birds to observe: cave & cliff swallows, house finches, black-throated sparrows, Stellar’s jay, a Gila woodpecker and the wonderfully coloured vermillion flycatcher. Back at the VC we sat near the feeders watching goldfinches darting in and out, and were once again entranced by the hummingbirds. 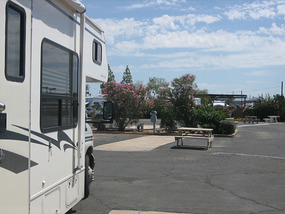 A spot of shopping was next on the menu with a visit to my favourite shop, Ross Dress for Less – the US version of TK Maxx. Lots of bargains were to be had, but I managed to resist them all except 2 pairs of trainers and some sports socks – last of the big shoppers, I am. We continued on our way up to Benson and stayed at the huge Butterfield RV site, full of giant pull thrus but more than half empty. Apparently it is completely full through the winter – its only mad dogs & Englishmen etc etc....

It was a very nice site with beautiful facilities and we were very happy – until we became aware of the noise: train hooters close by, which sounded ALL night...it was very hot & sleep was almost impossible so we read our books and listened to those pesky trains.
Other Entries
-