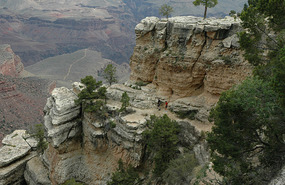 
Up early again (doing well perpetuating early rises, NOT my forte) so we retraced last night’s steps to Mather Point, took pictures of how it looked in the daylight then walked the rim trail east to Yavapai Point. We had fabulous views everywhere: the wonderful rock structures with their different coloured layers fading away into the distance, blue blue skies, green vegetation and desert plants. 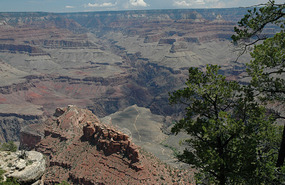 We wanted to access the western rim (where we didn’t visit in ‘97) so we got the bus there and got off at the first point, Trail Overlook. The bus is the only way to access anywhere west of Canyon Village, but you can drive eastwards in your own vehicle. The service is excellent, very frequent and runs in a continuous loop and you can hop on & off as you choose – providing there is room. 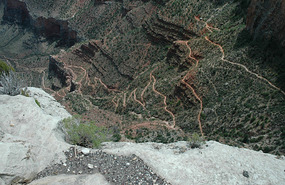 Trail Overlook does exactly what it says on the tin: it looks back towards the village where all the hotels are, plus it has a great view of the Bright Angel Trail which zigzags down into the canyon. We watched some of the mules which carry people down then walked the rim trail to Maricopa Point, where I was delighted to see some Mule Deer grazing. 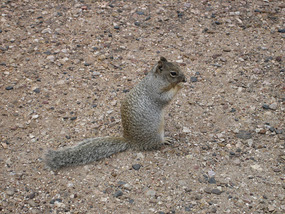 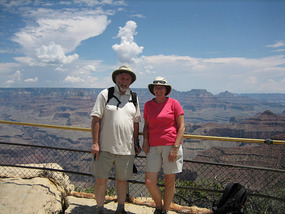 Us at Pima Point

It was so hot by now that we decided to take the bus to Pima Point and found a nice patch of shade to eat our lunch, where we were joined by a ground squirrel who posed beautifully whilst eating a nut. We went on to Hermit’s Rest at the far end where we enjoyed a welcome ice cream, then queued to get the bus back to the village. Many nationalities were represented here, but the Italian group took the prize for best pushing to get onto the bus, to the annoyance of us and an American family – we had all been standing at the stop for 45 mins whilst 3 full buses went past, then literally got elbowed out of the way. Grrrr. 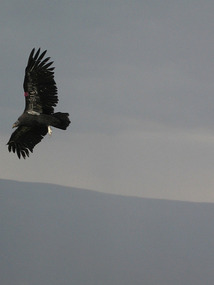 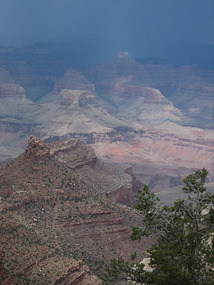 We eventually made our way back to Bright Angel Lodge to do some shopping, then joined a ranger on the rim for a free talk on Californian condors. It was fascinating, and we learned such a lot: apparently the world population was down to only 15 in the 1990s, but after capture, a successful breeding programme and release back into the wild, they were now at 225 and increasing annually. The grand finale to the talk was the appearance of a condor right over our heads, so close we could read its tag (number 16) and it soared above the patio as if it knew we were talking about it. Magic. 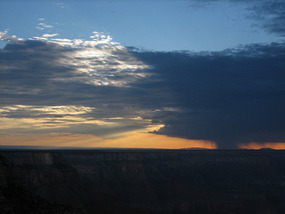 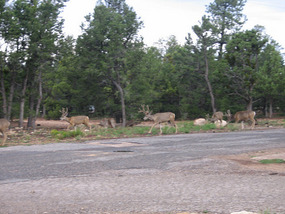 Deer on the campsite


A thunderstorm was coming in, so we took shelter and watched it approach – it was a great sight of spectacular lightning, with the skies and therefore the rocks rapidly changing colour. Once the torrential rain had abated a little, we caught the bus back to the site and barbecued (in the rain) watched by a family of mule deer who were wandering past.