-
Minor confusion with me working out which plane that I was to take on the second leg to Dubai. Solution is look at your itinerary and realise that with code sharing, one could be on either an Emirates or Qantas plane. More importantly, once my tired brain had understood that on the boarding card which had no gate number or seating zone printed on it, what the difference is between the boarding time and departure time is to then realise that the flight that I was supposed to be on, its details was still coming up on the airport departure screen. 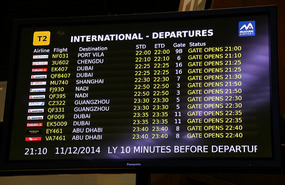 .
The on-board plane announcement said that transiting passengers to Dubai were to take everything off the plane, go through security and re board at gate 16. Or at least that is what I thought was said. My brain was therefore somehow saying that I was to board an Emirates flight for the next leg as well and I would be re-joining the plane that I had just arrived on at gate 16 but alas this was not the case. The actual plane that I was to be on was leaving an hour later from gate 11 and was a Qantas plane rather than the Emirates one that I had arrived on and both 380 planes were going to Dubai. 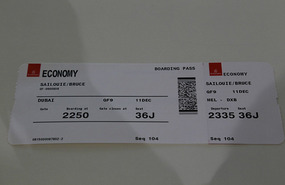 .
The boarding pass did say QF9 plus if I had read the itinerary, it did say which airline is operating which flight. So simple!

QF9 to Dubai and it was aboard a Qantas flight with this time my seat was upstairs at the very rear of the small cabin which had only 30 cattle class passengers.

What was supposed to have been an 11.35 pm departure ended up nearly an hour later at 12.20 am due to the late arrival of a connecting domestic flight from Sydney. With the late departure, the Captain advised that the plane will still arrive in Dubai nearly on time 13 hr 30 min later as oppose to what I was expecting to be a scheduled 14 hour 10min flight. Plus this flight was going onto London and had other connecting flights to meet.

Yes, with a small cabin we had excellent attention and service by the 2 cabin staff even though when "bumped", coffee and then later OJ was spilled on me. Plus this cabin wasn't full.

Yellow curry of Barramundi (fish) with green beans and jasmine rice and chocolate mousse for my second dinner. 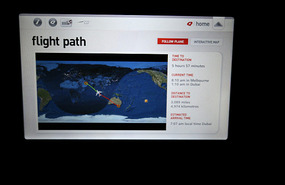