-
The Hararis and the hyenas have an unusual relationship. Remember the city wall has small gates to allow the hyenas in at night. Besides being useful for eating garbage left on the streets, they also take away djinn or harmful spirits that sometimes possess people.

Harar's most famous attraction is the hyena man. Just outside the city southern wall Yusuf Pepe feeds nightly the hyenas. Another "newer" hyena man feeds these animals outside the northern gate.

This started in the late 1950's with one story saying it was to prevent the hyenas from feeding on the local cattle. Every night he feeds raw meat given to him from the city's slaughterhouses. When we got there, the "show" had already started with a few being fed by the tourists with the meat at the end of a short stick. Most held one end of the stick in their mouth. 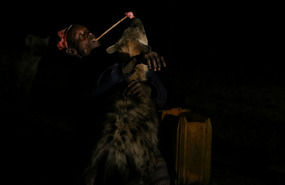 CLICK onto the picture to see it better
Remembering that there are no fences here, these animals are wild. While they are wild, I saw them more of Yusuf own pet tame dogs as he was calling them by name. At first, he fed them with his hands, then he puts the meat on a stick which he puts in his mouth. There is even a picture of him cuddling one of them.


At first I didn’t want to feed these elusive animals up close and personal and was quite content to try and take clear hand held photos at 1/40 with the available limited light by the 4 x 4 and tuktuks or Bajajs parked there. My monopod was back in the hotel! Trouble the tourists kept standing in front of the light source.

I suppose that I see these as dirty ferocious animals kind of at the bottom of the food chain cleaning up after the other scavengers have done their work. They are Africa’s second largest predator and potentially dangerous. Perhaps they are more afraid of us than us of them? In the end I relented …

A walk in the dark for dinner at Hirut Restaurant and it was a simple meal of normal Tibs for 50 birr / NZ$3.30 / US$2.45. I was more than happy to have gone back to Fresh Touch.

My time in Harar was far too short. I am really glad that I made the effort to travel here to the east. It has only wetted my appetite to return one year. I think that if I ever did then it is a place to stay within the wall city itself and let the atmosphere soak into you. 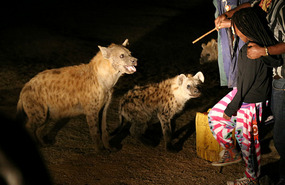 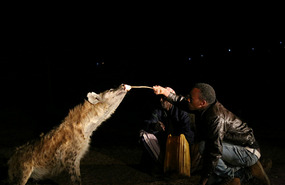 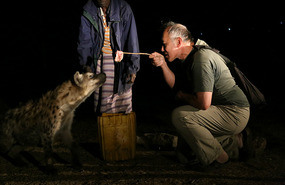 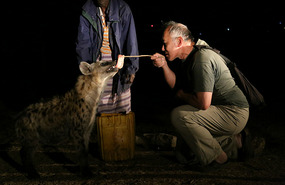 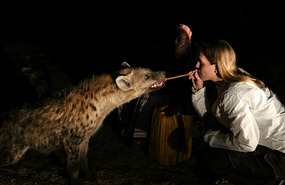 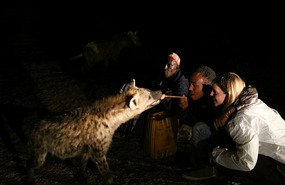 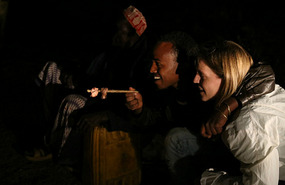 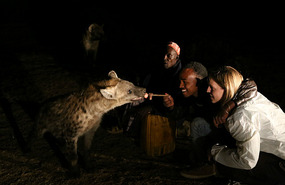