Well we are in Potosi now, and finally have a chance to get our clothes clean and some time on a computer 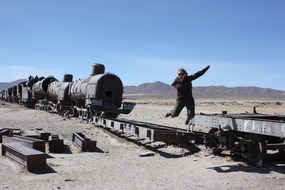 Train graveyard
. We just came from an amazing experience down near a small town called Uyuni. After completing our trek around Illampu, we spent one more night in Sorata before heading back to La Paz. We got a micro back to La Paz Saturday morning, arriving around 4pm and went straight to the bus terminal to see if we could get a bus to Uyuni that night. We found what seemed to be the last 2 tickets on an overnight bus. We got some dinner, took care of some last minute details, and hopped on the bus. It was an older bus, not as nice looking as some of the others we have seen, but I guess you get what you pay for. The seats where cramped and it seemed the "heat" they claimed to have were some blankets. Casey being the smart traveler had us bring our sleeping bags and puffy jackets on the bus with us. We needed them, it got way cold on our 12 hour journey.
We were heading south to a remote town on the edge of a huge salt flat. I did not sleep well at all while Casey dozed in and out, with the last 4 hours of the journey on a very bumpy dirt road I´m not sure anyone got any sleep 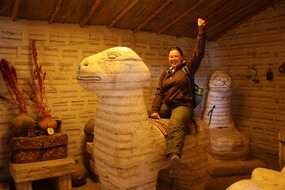 Riding a a salt Llama
. We arrived at 7am in a windy sleepy town. We had decided on staying in town one day before heading out on a tour of the Salar De Uyuni (the Salt flat). Well this turned out to be an interesting decision as the electricity was out in town and during the day the winds became so intense that we could not walk around outside due to the blowing sand and dirt. We hunkered down in our fancy hotel room with heated floors and hot water, well we had the hot water because it was gas heated but the floors, well that required electricity so the room was pretty cold. For dinner that night we went out hand had some great pizza at a restaurant run by a Bostonian guy and his Bolivian wife. We also booked a tour to leave the next morning.
We were supposed to leave at 10:30 but did not leave until almost 1pm, it seems the 4x4 was not quite ready, as in a wheel was missing. Casey, myself and 4 others eventually climbed into the aging Toyota Land Cruiser with our not so talkative guide Freddy, and headed out to the Salar De Uyuni 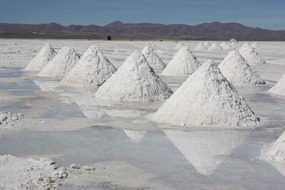 Salt piles ready for transport
. This is the world's largest salt flat at 12,106 sq km. After a few short stops we got out to the flats, there is no road just dark lines were thousands of jeeps have gone in the past. There was nothing to see for miles, the ground was pure white, broken up in hexigonal shapes. This was all salt for as far as one can see in all directions. Wih our trusty driver only falling asleep long enough to drift across the flat a few times, we made it out to a small "island" of land. Here we took a short hike among tall cacti and cool rocks with a volcanic origin. The whole leaving real late thing that pissed me off so much this morning seemed to actually work in our favor as we were behind the masses and it was not so crowded at our stops. Back in the Land Cruiser and slowly speeding along the great vastness of nothing we got to the southern edge of the Salt flat and our hotel. This was not your ordinary hotel, this one was made entirely out of salt. The walls, the floor, the tables, the chairs and the platforms for our beds all salt! It was a very cozy hotel and not even crowded 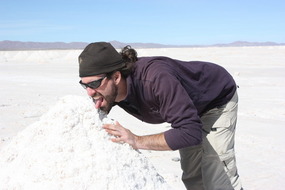 Kinda salty!
. Chilled for awhile before dinner by writing and talking with the other tourists and a very friendly and excitable little bolivian girl. Casey went into babysitter mode and started drawing and coloring with her. Dinner was great and so was the many bottles of wine that got passed around. It was a good night. It had been a very good day that started pretty bad but as always it all works out in the end.
The next day started early and was a very long day. The wind picked up again today, this made our stops very short as the blowing sand made it no fun to be out of the car. Today we saw some amazing scenery as we drove way south towards the Chilean border. Volcanoes, amazing colored mountains, cool geologic formations and mineral rich lakes. At one of the lakes we got to see the Andean Flamingos, that's right flamingoes are not just in the tropics. These birds hang out at these icy mineral lakes at close to 5000 meters. The last stop of the day was to be the most exciting, Laguna Colorada, which should have been a deep red color from the microbes that live in it 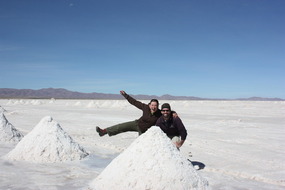 yup
. But because of the crazy winds that have been wrecking havock the lake was not red and not that exciting at all, a big disappointment. This night was spent in a mud brick building and we all slept in one small room. Dinner was not so good, spaghetti and then it was off to sleep because of a 5am start the next day.
Day 3 of our tour we go going super early to get to the hot springs, again it was crazy windy and cold. We drove past the geothermal area in the dark so did not see much of that but we did see an amazing sunrise. At the hot springs we had breakfast and then decided to brave the wind and cold and soak for a bit. The water was nice and warm, the wind however gave me dirt and rock dandruff for the next day or so. From here we continued south through some of the best scenery yet to the Chilean border. Here we dropped off 2 of the folks in our car and headed back towards Uyuni. The trip back was a long one, in fact the whole tour was a long drive with lots of time in the car. We got back to Uyuni having only ran out of gas once, about 13 hours after we left our hotel that morning. The whole gas thing was not that big of a deal, Freddy just had to siphon gas from tanks on the roof into the gas tank.
We thought we would be leaving Uyuni that night on a midnight train to Oruro, this did not happen due to the fact that there had been no electricity in town for the past four days and the train was unable to get any diesel, so we were stuck there one more night.
It was an amazing experience, the area is so remote, unique and beautiful that it was worth the very long days in the car.

We loved reading your blog. It was quite amusing! I hope you no longer have dirt and rock dandruff! You did warn us about the slow pace in South America! Keep your sense of humor...love you

Great to hear about your adventures, guys. Matt, I enjoy your writing style and am feeling inspired to get back into the practice myself. I miss you both and hope to get back to the Headlands ASAP, perhaps even this fall if a job somehow opens up. I just can't get enough of your guest room!

P.S. Matt, I hope you didn't tell the Bostonian pizza shop owner that you're a Yankees fan.

Looks like you're having yet another awesome summer holiday!! So jealous! Looking forward to seeing more photos when you get back.