-
Hey all thanks for following us on our journeys.
Well we left NY on July 2nd and landed in La Paz, Bolivia at 5:30 am on the 3rd 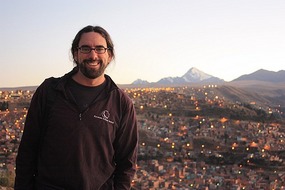 Our first view of La PAz
. This airport is the highest international airport in the world. We got through customs and immigration with no problem, just $260 lighter (for the visas). After checking into the hotel and eating some breakfast we crashed for about 4 hours. Waking up totally refreshed we headed out on the town. La Paz is a pretty big city, about one million people. The air is a bit thin here at 12,000 feet so just walking around this first day was a challenge. For dinner we decided to go to a dinner show of traditional music and dancing, called a peña. This was lots of fun and very interesting, it was a small audience and I got called up on the stage to dance with them three times and Casey once.
Day 2 In town we wandered around planning the next couple of days. We went to the Coca Museum, this was very interesting. It told the story of how coca is used in the country in a very harmless way and has been a part of the culture for thousands of years. That is until people found out that it could also make cocaine, then it all went down hill here 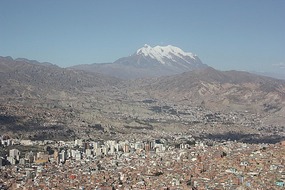 La Paz
. Coca leaves are still chewed by most of the indigenous people and we have been drinking coca tea every morning, it is tasty and helps with adjusting to the altitude. That night we went to Cholita Wrestling. Think Hulk Hogan meets little indigenous women, in highly entertaining choreographed matches in (and out of) a ring. That´s right, it was bizarre, but fun and amusing. We sat right up front and almost became part of the show.
Day 3 We went on a tour to Tiwanaku, an archeological site of a culture that lived here before the Inca. We saw some beautiful towering stone monolith sculptures of priests and wisemen and some of the excavation in action. Our guide was good but as the day went on he got lazy with his English translations. For dinner once again we splurged for a fancy candle light dinner. When I say splurge I mean that we spent about $25 or so for the both of us to eat nice steak and fish dinners and have some beer and dessert.
Day 4 in La Paz was very uplifting. We took another tour, this time to a place called Chacaltaya 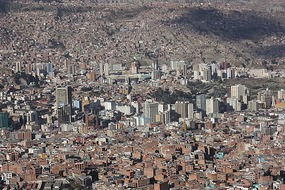 --
. It is a ski resort at 17,500 ft. (5,300 meters). The drive up was very, lets say... interesting, we were in a mini van but probably should have been in a four wheel drive vehicle. At the end of the road is a ski chalet (well sort of). From here we hiked slowly to the top taking breathers every few minutes. At the top we were now at 17,900 feet, the highest in elevation I have ever been at! (Casey has been higher, on Mt. Kilimanjaro) The views were amazing. We could see Lake Titicaca, the high plains of Bolivia and some of the majestic mountains of the Andes. From here the tour took us back down through La Paz to the south side of town to a cool geologic site called Valley of the Moon. We took a short hike through these formations that look like some giant dribbled wet sand to make weird pillar like towers. This tour was great and our guide was much better than the one we had the day before. There was a lot of driving during this day but that in itself was like a tour because we got to see many parts of the area that we would not otherwise have seen. For dinner we went to a British curry house and has some great indian food.
We have been eating lots of Llama meat so far which is very good. The people of Bolivia that we have had interaction with are very nice and easy going, the street vendors are not as pushy as in other countries we have visited. This makes walking around pleasant, and we feel very safe here.
From here we are heading to Sorata were we will hopefully be starting a multi-day trek.
Adios from La Paz.
Matt and Casey

Casey! So good to see you are still out there in the world. I have been thinking about you a ton these days and am so glad to know I can officially stalk your life through this blog. I look forward to following the adventures, and say hi to those mountains for me. Miss you!

Awesome! You have the best adventures! Thanks for blogging. It is so much fun to "travel "along wiht you. - Carol