The last few days of Bolivia

-
After arriving in Cochabamba at 6:30am we went on a search for some breakfast, apparently no one eats before 8am so we wandered the streets for a bit before finding a place open to eat. Dumbo was its namo, it a large chain not unlike Friendly´s, an icecream parlor with some food. After eating a rather good breakfast actually, we were off to figure out how to get to National Park Torotoro. This turned out to be harder than we thought without prior arrangement and after 3 tour companies and hours of discussion and decisions it looked as if we were not going to make it there. By then it was about noon and we had to find a place to sleep and figure out what to do next. Cochabamba has the distinct honor of having the world´s largest christ statue, but other than that not much else. After settling in to a room and getting some lunch we decided to take a tourist bus around the city. You know the kind with the open upper deck, yup now we were being the ultimate tourists. The tour was about an hour and a half and we zig-zagged all over the city. Unfortunately the speaker system that the tour guide was using was muffled so badly that Casey could not understand her at all, which meant I understood even less. It was an interesting tour (kind of) but at least it was something to do for a few hours. After the riveting tour we took care of some business and got some dinner. We shared a local dish that was really good, basically a mound of chopped beef with chicharon and french fries called "Pique a lo Macho."
Then next morning we we on a bus to La Paz as soon as we could (about 8:30am), we were now on our way to Coroico 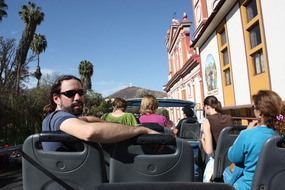 Bus tour
. The bus to La Paz was a 8 hour ride but we had great seats this time. It was a double decker and we had seats right up front above the driver, and had a large window to watch the scenery go by. Only one problem, we were heading into the sun so it was very hot. After the 8 hours it was a quick taxi ride to get a micro to Coroico. As soon as we stepped out of the taxi two women were fighting over us to get us on their micro. Casey made a quick decision and the lady grabbed her pack and ran with it to put it on her micro, remember that her pack is pretty heavy. Now we had a 3 hour trip down into the Yungas, we were leaving the high plains of Bolivia and moving towards the rainforest. Coroico is not quite rainforest but on the transition to it. Once in the center of town we bought some food supplies and got a taxi to our hotel, after some confusion about where it was our driver picked up a friend who knew where it was. At 10pm Mario greeted us and showed us the house.
This was our final splurge in Bolivia, we basically had a whole house to ourselves 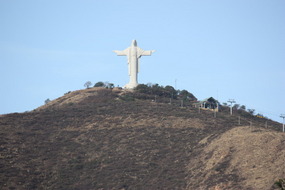 The biggest Crist in the world
. We had rented a room but no one else was staying there. We had the master bedroom withh a private bathroom and a balcony overlooking the pool and the amazing valleys below. The next day and a half was spent lounging by our private pool and enjoying the fabulous views while catching up in our journals, reading and relaxing. I spent most of my time in a hammock, very nice. We went to town for lunch at a great little place that made its own icecream which of course we sampled. For dinner we cooked our own version of "pasta con verduras." It was not as good as Rolando´s from the trek, but it was dinner. For breakfast the next day we had eggs and french fries, as well as some fresh squeezed orange juice from oranges we picked from orange trees on the property the day before. This place was like paradise and we did not want to leave, it felt like we were playing house in Bolivia.
But alas it was time to go and get ourselves back to La Paz so we could get our bus to Cusco, Peru. I can`t believe it but our month is up and our travels are about to change. In two days time we will meet my parents in Cusco and travel with them for the next 3 weeks, something we have been looking foward to for about a year now. We get on a bus in the morning for a 12 hour journey past Lake Titicaca in to Peru.
Other Entries
-

Great fun to read! So descriptive!

What an awesome trip! We're so jealous! Enjoy the time with Mike and Esther. Hope to meet Casey one of these days.