-
According to the 2001 Census, Bolivia has 8,274,325 inhabitants. 45 per cent are children and adolescents aged under 18. There are an estimated 1,529,689 children aged under 6, with a majority living at risk with respect to the vulnerability of their rights. My first day volunteering at a government hospital 'Instituto Psicopedagógico Ciudad Joven San Juan de Dios' in Sucre, Bolivia and I am set back to reality and saw some of these statistics first-hand. I was introduced to this project through my Spanish non profit school Fenix which in turn was a tip from my another traveler and friend I met in Colombia, who had learnt Spanish here in Sucre too. Thanks Oliver for the Fenix recommendation. 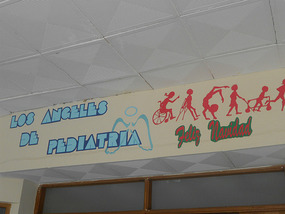 Slogan over the entrance to 'Pedetria'
. It has a wonderful view and a large outdoor space , also a courtyard full of children's climbing frames. As I enter the building I saw a mural reading the 'Los Angeles de Pediatria' and an angel icon in light blue. It immediately reminded me of Angeles de Medellin where I volunteered in Colombia and I smiled to myself thinking I've come to the right place. I met the principal doctor Silvia and the nurse. I then met some 'poquitos', very young children as Jael talked to a mother about the condition. There were limited facilities here, a small space for many children. The children were strapped into chairs as they played at a table. I then met the group I would stay with and the leader Rosita and student volunteer Gretty. Gretty quickly started to practice her English with me and we took it turns practicing the two languages, she would ask or tell me something in English and I would reply in Spanish. It was fun and she seemed genuinely interested in me unlike, unfortunately a lot of other Bolivians I've met! 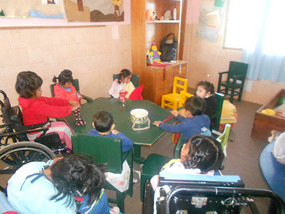 Classroom and group of children I volunteer with
. I then asked questions about them and their conditions and situations. Then the doctor called a meeting just as we were feeding the children their jelly snack. The ladies asked me if I was OK to stay with them, I nodded.

There I was, on my first day, left alone and more importantly, in charge of these children. It was exhilarating. We banged instruments on the table, Barbara kept climbing over the table to me, so I'd pick her up and put her back into the chair again. This repeated several times. I kept picking up the thrown and dropped instruments from the floor back onto the table. As I did Hugo grabbed my hair tight and kind of gave it a good yank or two, I learned later that this was already a sign of trust for me and he gave me big hugs which I returned and felt like I had being missing. Diana kept wheeling over to the cupboards trying to take new toys out, tipping over the finished pots of jelly in the process. I would pick them up and wheel her back to the table again 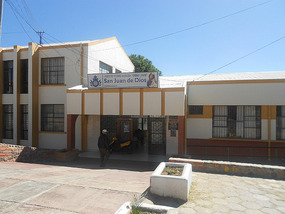 Main entrance to the institute
. About three minutes later this would repeat. Suddenly it was time for lunch, more than one hour and thirty minutes had gone by when we were all playing.

All the kids were taken to the canteen, the staff were given a Salpena which I thanks them for. Then the ladies asked if I would feed Rodrigo. More than forty five minutes later we had finished, he was a slow eater and I had to carefully hold his head and guide each spoonful into his mouth, waiting with the empty spoon to catch the dribbles and mopping up with his bib. Before I left, I helped Gretty stick some cards together for Mother's Day in Bolivia and we both chatted about music, dancing, nightclubs in Sucre ( I really want to go dancing) and then I asked again all the names of the children so I could remember and also write them down.

I asked her about the hospital and how many children in total were staying here. A total of 23 stay overnight and live here with more coming as day visitors, dropped off by their families so roughly 40 children in total 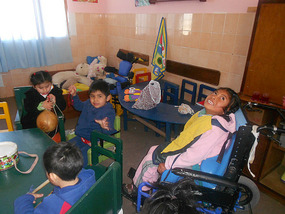 Children having fun playing with instruments
. Our group were all aged between three and ten years old, I enjoyed myself but also reminded me of the struggles these kids face. Barbara for example was abandoned, has autism and her Dad was a drunk with her Mother having mental illness problems. Maribel, so sweet, intelligent, understood everything but just flops over when you lift here from her wheelchair to the chair as she is paralyzed. I felt I was so lucky and I was glad to be here helping them and making them smile. The Bolivian government fund this centre, but they give 7BS a day per kid (that is about 70 pence GBP) and only up to the first two hundred kids at the whole hospital. There's currently three hundred kids here older children up to the age of eighteen, a bakery, school and gymnasium. I met other volunteers here from Denmark and Germany. The German girl made me feel very welcome and we chatted a little, it was nice someone took the time to do that I thought later. 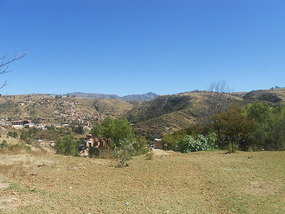 View from the hospital
. The kids loved watching the film and there were lots of laughter, crying and noises from them all the way through.

On my start of my second week volunteering here I was feeling a little sick and out of breath, I put it down to combination of altitude and maybe the effects of the yellow fever vaccination I had had here. On the way I was thinking I did not wish to continue at this volunteer project. It is so sad to see these children like this, in addition I found this work very hard. I think it is easier when the children are independent but once I started I realised it was such a worthwhile volunteering and that day with Gretty off sick, I was in fact very much needed. My highlight was Hugo returning and hugging me tightly most of the morning, while Crystal played with my hands and occasionally would pinch my hand or arms, I'd then see out of the corner of my eye Barbara's sweet but cheeky smile at me and Diane furiously clapping my hands together with hers over the top 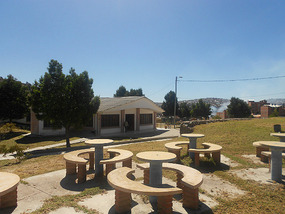 Outdoor space at Hospital
. When I left I got to take Nelson, who earlier spat a lot of his break time biscuit into my face and hair, for an assisted walk to the bedroom where the kids take their afternoon naps. He held on tight to my hands high above his head and took each step very well. I felt satisfied and happy to be of help here although I know it was having quite a profound effect on me seeing these children like this.

There is a much wider issue here for Bolivia's children. UNICEF reported these issues of high numbers of street children, abandonment and the culture in which children are treated in families here in Bolivia, you can read the full article here: http://www.unicef.org/bolivia/children_1540.htm

Many times sitting in one of Sucre's many cafes in the daytime or night time, street kids have come to beg for money, selling books or want to clean my trainers. I have seen young boys jostle on the street for cleaning the next man's pair of shoes, in a bid to get a bit more money no doubt to eat the next day. It's a case of survival and with not enough Government funding there are many charities at work here providing for the children of Bolivia.

To find out more about the Institute Psicopedagógico you can visit their volunteer information page here: http://www.hsjd.org/voluntariado-bolivia.php
Other Entries
-