Everything in One Day

-
We woke up early this morning to head out to Bratislava. Waking up at 6AM and leaving at 7AM, we arrived in Bratislava at 11AM. The hostel we booked through HostelBookers was called Hostel Blues and charged us 17 Euros per person for a four person ensuite with full bathroom. Overall, it was a very nice hostel, located quite near to Bratislava's old town.

Since we arrived before 1PM, we were not allowed to check-in; however, we could leave our baggage in their locked luggage room 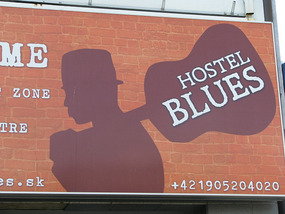 Hostel Sign
. This was a nice commodity, since our bags are not the easiest to carry around. The hostel staff gave us a city map and we set out on our way.

We explored the center of the old town first. It was filled with quaint little market stands selling both location specific foods and trinkets. It was fun to look at them, and we continued to do so on our way to the castle. The castle is situated on a big hill next to the Danube river. We all survived the hike up to the top and enjoyed the spectacular view of the surrounding landscape and the city. After taking in the great view, we bought tickets to check out some exhibitions located within the castle (2 euro for student, 4 for adult). The exhibitions were displayed throughout each floor (4 floors). The first floor contained a history of where Slovakia’s language came from and how it is being influence today. The second floor contained medals which honor soldiers of different wars. The third floor contained a beautiful organ, a large painting, and some history of the castle 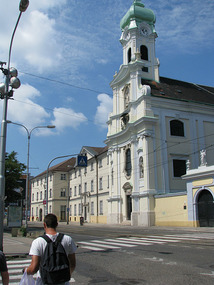 Heading to Old Town
. The fourth floor contained a more in depth history of the castle and also contained a staircase into one of the towers. This led to a room with windows to allow the viewers to see out of the tower and get an even better scenic view than atop the hill next to the castle. Once we descended and exited the castle, we saw around 65 people dressed up in medieval attire (10 or so were on horses). We waited outside with a large group of spectators who seemed to be waiting for some type of parade. Sure enough, after about 10 minutes, a medieval parade began and they marched out of the castle and all the way into town. Eventually, we lost sight and sound of them.

After we finished at the castle, it was already 1:45 and we were getting hungry. We decided to grab some food en-route back to the hostel. We stopped at a pub, recommended to us by the hostel staff (who had also given us a %10 discount to the pub). It was called Slovak pub. I had sheep cheese pirogys covered in sour cream and bacon and Dilyara had sheep cheese and potatoes mashed together kind of like macaroni and cheese. They were both very tasty dishes. The sheep were raised on a farm about 20 miles away from Bratislava and the Pub was proudly advertising that this is where they obtain their great sheep cheese.

Once we finished eating, we went to the hostel to check-in and freshen up.

After grabbing some showers and changing, we went to a new shopping area in Bratislava located in the Southeast area of the city 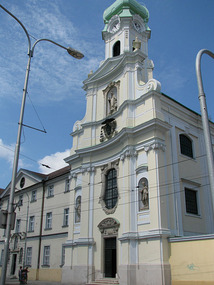 Heading to Old Town
. We walked through the newly renovated area and along the Danube (about 30 minute walk) until we returned to the old city portion. While walking, we could not resist grabbing an ice cream cone J .

As we reentered the old city, we saw a large crowd standing around one of the city squares. After approaching, we saw that a human-size game of chess had been set up. There were two players playing the match on a normal board, who then called out their moves. The life-size people pieces would then move. It was quite entertaining the watch. It turns out that this consisted of a lot of the same people we saw reenacting the medieval parade at the castle. All of the pieces were dressed up in medieval attire and would yell and pretend to be killing the other piece when a piece was taken in the actual chess game; all the while, a jester walked around narrating and saying funny things (I couldn’t understand the Slovak language, but all the crowd was laughing, so I guess it was funny).

Once the game ended, we decided to grab a drink and relax in a bar while waiting to walk to a memorial to the Soviet Union soldiers who died during the war. We had been recommended to visit the memorial in the evening, because it overlooked the city and would give a nice lighted view of the city.

We found a little restaurant in the middle of the city and sat down outside. Soon after, we realized this was a big mistake. Mosquitos came from every direction and attacked us like crazy. The restaurant staff began bringing out repellant for the customers to use, but by the time a bottle got to our table, it was empty…. We quickly got our check and left.

Since the sun had begun to set, we decided to move toward the memorial around 8:15PM. After hiking up the steep roads and curving our way to the destination, we arrived at 9:30 to the monument. The mosquitos experienced a buffet of fine dining that evening and we were not happy about it; however, the view was well worth it. We were able to see all of Bratislava lit up at nighttime.

We then descended back down the large hill, made our way to a bar to have a relaxing drink, then headed back to the hostel to sleep.