Keep on Keepin On

-
This morning, we woke up earlier and got to the train station to make the 7:40 AM train. As our tiredness took hold, we stumbled on and off of the metro stops in Vienna to ensure our correct arrival time to Vienna's WestBahnhof.

We arrived to Linz at 8:59AM and deposited a couple Euros in a locker to keep our heavy bags safe 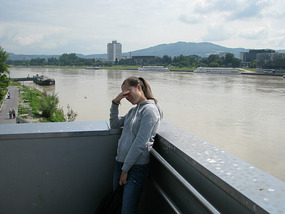 Outside the Museum
. We were lost as soon as we left the train station. I had wanted to return to Linz (I had previously visited Linz in 2009) to visit an interesting science museum (Ars Electronica Museum) and to see the city again. Unfortunately, my memory did not hold out and I had no idea where we were.

To solve our situation, we retrieved the IPAD from our backpack and attempted to find where we were using a preloaded map from an APP Dilyara had previously downloaded about Linz (we do not have a data plan, so internet only works in WIFI spots). After walking back in forth in front of the train station about 5 times, we finally agreed on the correct direction and proceeded on.

After discovering that we were indeed moving the correct direction, we began to enjoy the beauty of the town. Linz is somewhat small in comparison to the other places that we have (and will be) visited on this trip; however, it is always nice to have a little change up 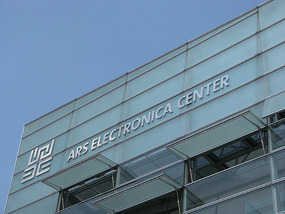 To get to the Science Museum from the train station, we had to walk through pretty much the rest of the city (so this was in a way good, because it forced us to see everything). We began in the newer section of the city, and ,as we moved toward the river, later passed through the old section.

Even though the city is small, it still packs a punch. It offers the pretty little streets of a countryside city, a large castle, stunning views, and some great museums. They have one of the most famous Modern Art Museums in Austria; however, Modern Art is not our favorite thing, so we did not check it out (and I am pretty sure I saw it last time I came).

After about a 35 minute walk (fast walking to beat all of the school groups), we arrived at the Ars Electronica Museum. It had changed quite a bit since I had last been there, but it was still interesting. The bottom floor is the most intriguing. Linz is one of the leading technological cities in Austria, so they have a lot of cool things happening in/around their city

Church Near Museum
. On the bottom floor of the museum, we were able to draw in 3D (using 3D glasses and moving the marker through the air), see/interact with different type prototype robots, check out a 3D printing Lab, have a picture of our retinas taken, play with an eye-tracking program, and a couple of other neat things. Needless to say, it was pretty fun.

The other floors offer more "moving exhibit" things. The last time that I visited, there were a lot more neat/interactive robots, games, etc. This time, it was neat, but not as great. A couple of the exhibits were still being worked on. All-in-all it was a lot of fun, but I wish that Dilyara could have seen it when I went last time!

After we left the museum, we slowly made our way back to the train station. First we grabbed some cheap lunch (A Doner Kebap and a Falafel sandwhich), then explored the old town, then the new town. I guess we are chess magnets, because we ran into a "Large" chess game in the square before the train station. The pieces came up to about waste height. We watched for some time, then went onto the train station. Our train for Salzburg left around 2 PM.