-
We arrived from Linz around 3 PM. Our Hostel was located about a 25 Minute walk from the train station. Since we did not have a map of Salzburg, we stopped and asked for a free map from the information station. The woman behind the counter was nice and wanted to sell us a bus ticket because she thought the walk was to far. We didn't buy it...

We arrived to the Lehenerhof Hotel (living in style, 62 Euros a night) 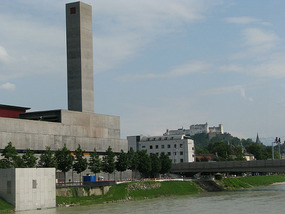 On the way to the hostel
. This was literally the cheapest place to stay in all of Salzburg. We were amazed that we had to splurge so much, but we did not want to pass up this city. I had also traveled to Salzburg in 2009, and remembered it as one of my favorite "small" cities, so we had to go.

After getting checked in, we made for the city. We made it a point to walk to every church/landmark (such as Mozarts Birth-House) on the map today to ensure we saw the whole city (every landmark on the side of the river with the castle). The only two things we saved for tomorrow were entering into the castle, and exploring the other side of the river.

We also walked up to the hostel in which I stayed on my previous trip to Salzburg. It is at one of the highest points and "on the side" of Salzburg. I personally think that it gives the best view of the entire city (allowing you to see the city and the castle). We had a couple drinks and then walked back down into the city.

Once we walked around a little more, we decided to head back to the hotel and get a full nights rest for the next day.