-
We awoke at 7AM in order to pack our bags and prepare for the 9ish short train ride into Zurich's main train station.

Upon arrival, we immediately sought out the lockers to stow our large bags in while we went out to tour the city 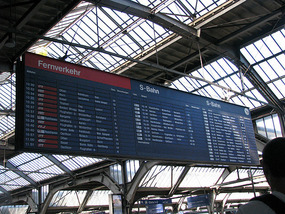 After finding a tourist center and a free map, we mapped out the best route for us to take and set off.

Immediately, we realized that Zurich is not the best city for tourists wanting to see European cities (at least not for us). It is mainly a financial city, so there is not much of an old town, or things to do (besides go to museums).

Since we did not want to go to museums, we saw all the important landmarks on the tourist map, climbed the city's largest church tower, watched some large figure chess in a park (it is kind of a city tradition now, we have to do this), then ran out of things to do.

So, we made our way back to the train station and caught the train at around 3:30PM to Lyon, France.

4 hours and 3 train changes later, we arrived and found our hostel, hotel located quite near the train station, Lyon-Perrache. The hotel was called Hotel de Normandie .

Since it was already 7:30-8ish by the time we got settled, we checked emails, wrote blogs, reviewed pictures, and prepared for a good nights rest. We will wake up tomorrow morning and grab a 2 hour train back into Switzerland to visit Geneva.