-
We awoke around 7:45is to grab the 8:30 train into Geneva from the train station directly next to our hotel. Luckily, this one was direct and required no transfers.

Since the train had no WIFI, we amused ourselves by reading books on the Ipad/Ereader (what we have been doing on most of the trains) 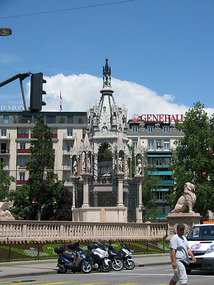 On the way
. 2 hours later, we arrived in Geneva.

Just like in the other cities, we immediately sought out the tourist information center and obtained a free map. This day, we also had to detour to a nearby pharmacy to grab some allergy medicine. Since it had not been raining and keeping the plant debris out of the air, I had been sneezing every 10 minutes; literally (and of course we left our claritin at the hotel on accident).

We purchased some cetirizine to help calm the allergies, but I didn't fully recover until the evening. So, I was in and out of those sneezy dazes the entire day and walking quite slowly (Dilyara is never happy about walking slowly ;)).

After we got the meds and the map, we began to walk around the city. Unfortunately, Geneva is a lot like Zurich and is more of a city than a tourist old european city. Anyway, we still walked around and saw all of the highlights on the map; some of which included a large fountain which shot water high into the sky, the UN building, of course the cute streets, etc. We also found time to stop at a Fondue restaurant and grab a classic Cheese Fondue in Geneva. Even though this is usually a wintertime treat, we still thoroughly enjoyed it. I had a french beer and DIlyara had a wine to accompany the treat.

We then made our way back to the train station and grabbed a couple trains back to Lyon. Arriving in Lyon at 6:30ish, we wondered around our hotel to find a grocery store. We grabbed some waters and returned to the hotel for the evening. Tomorrow is Lyon, then on to Paris!

While trying to move the pictures from the camera to the computer, some were lost. We are not sure what happened, but it may have to do with the batteries in the camera dying today... :(. So, we have a lot less pictures than we actually took ;(