-
We woke up around 8AM, packed our bags and began to search for the luggage lockers. After searching for about 30 minutes, we couldn't find any ;(, so we decided to go back to our hotel and ask them if we could leave our bags there. To our excitement, they let us leave our heavy pieces of luggage.

Taking just our small backpack with us, we ventured into Lyon 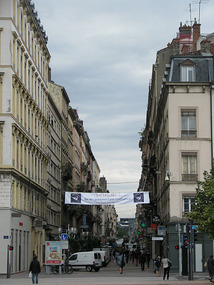 Lyon
. We got on a street called Victor Hugo which led us to the nearest Tourist Information Center on Place Bellacour. This was extrememly important, because we did not have a map until this point. To our surprise, we found out that Lyon is full of secret passage. Excited to try out these secret passages and explore the city, we set out.

We began our touring around by moving up the east side of the city. This led us to some ancient Roman Ampitheaters (The oldest part of the city). Next, we walked over to the large cathedral called Basilica of Notre-Dame de Fourviere. . It was neat because it had the normal "church" hall, but then another church in the basement (also large). So, two churches in one cathedral...intense.

Next, we took a windy, of the road pathway down the "little mountain" and returned to the "old" city. We quickly went through a small part of the "old" city and moved into another part of the city. We wanted to walk the streets in this part, then walk through the old city on our way back to the train station.

While walking, we began to find some of the secret passages marked on our tourist map. It was very cool/interesting, because to access the "secret tunnels", we had to go through normal looking doors. People must have made fun of us a lot, because we were not always successful in choosing the correct door to open. Most were locked, some led to dead ends... needless to say, Dilyara and I will not become Treasure hunters in the near future.

We then moved into the old city, which also contained these passages. We explored all of the important sites and Dilyara wanted to look at Souvenirs; however, I wanted to go through the secret passages. We immediately hit a crossroads, but, I was able to convince Dilyara that there were souvenirs on the otherside of each of the secret passages I wanted to go through....unfortunately, there were never souvenir stores on the other side; however, I got this to work about 5 times. It allowed me to get my "wannabe ninja sneaky secret passageway" urge out of my system.

Then, we moved toward the train station. We got our bags from our hotel and boarded the train at 4PM to Paris.
Other Entries
-