Arriving at the train station, we began to follow the exit signs 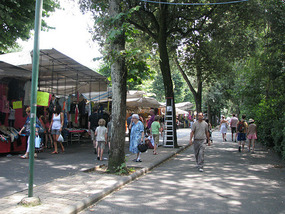 Siena
. After taking about 10 different sets of escalators, we found ourselves coming out on a street that we assumed was at a much higher elevation than that of the train station.

We did not have a map, and did not want to purchase one for 2 euros, so we began walking toward what we hoped was downtown. After taking a somewhat scenic route, we wound up at Fortezza Medicea. This is an old fort, which had a temporary theater in it on this day. Apparently we had stumbled on the beginning days of a jazz music festival. There were a lot of people carrying their instruments and music tones could be heard all around the fort. Connecting to the fort was a long line of outside shops. We decided to follow the shops and see where they would take us.

At the end of the line of shops, we found ourselves at plaza with a lot of buses. There was a sign that said "information", so we asked for a free map. Unfortunately, this was the bus information office, and they did not have any free maps for us 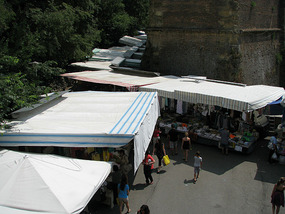 We then found a large post office and Dilyara sent out a postcard to her former colleagues at MUSC . Next, we made our way toward Piazza del Campo. Luckily, there was a tourist information office there and we grabbed a free map. Piazza del Campo is where they have the famous horse race in Siena. It is in a clam shape and is filled in with dirt for the event. Apparently, this can be seen in the movie “Quantum of Solace”. Dilyara and I will have to watch it again to check it out.

Next, we wound through some souvenir streets toward the main cathedral in Siena. Much like the cathedral in Florence, this one had many black stripes on the outside, giving it an interesting appearance (but very cool). Dilyara and I paid 8 euros total to see the interior of the church.

The inside of the cathedral displays many paintings on the ceiling, with hints of gold everywhere. It also has the black stripes running up most of the pillars on the interior 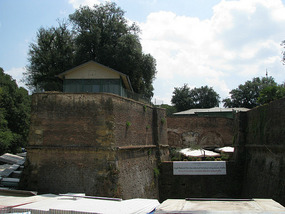 After the church, we walked across the city to see another church, Santa Maria dei Servi. This one was not that interesting, but it was worth the walk. Then, we made our way to the “Basilica of San Domenico”. This was pretty much the same as Sanata Maria dei Servi. They are both big and neat, but nothing super special.The view of downtown was pretty good though. We then made our way back to the many escalators to the train station. Since we were going to Pompeii the next day, we have decided to get seat reservations in Siena, instead of Florence (from our experience, it's always better to get those from smaller train stations, to avoid huge lines). We grabbed a train at 4:18 PM and arrived back in Florence around 5:30 PM.

In Florence, we walked through the market and a street of souvenir shops and then we walked to the Academia Gallery(which houses the famous sculpture of David). It was closed, so we walked back to the hotel to regroup for about 45 minutes 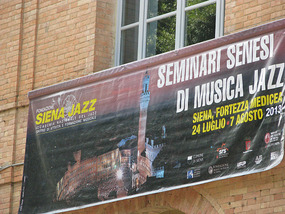 Leaving again around 7:30, we looked around for a close dinner place. We found a restaurant not too far away and stopped. I had a pizza margherita and DIlyara ate Pasta with garlic and chili pepper. The service was not that great and the food took forever. So much forever, that we did not leave until around 9:15 PM. The white wine was also not that great.

After the restaurant, we wanted to grab some waters for the evening, so we decided to go to the supermarket. The one that we normally go to was directly across from the Academia museum. Unfortunately we found it closed. We were just about to leave, but Dilyara noticed that Academia entrance doors were open and there were some people there.

Approaching the door, we were amazed. Spectacular, Awe inspiring, perfect craftsmanship, we saw DavidJ The statue of David, by Michelangelo, was standing inside of the museum; however, all of the security had the doors open (we assume they were closing) and allowed a perfect view of the statue from the street. It is amazing, how lucky we got since we have already given up to see it, because of all endless lines.