-
We woke up this morning and went downstairs for breakfast. Then it was time to pay before we went to the train station. When we went for checkout, it turns out that breakfast was not included. If I had known that before, I would have eaten a lot more. Instead, I had eaten one piece of bread, a piece of meat, and two hot chocolates over the course of two breakfasts.

Upset, we paid and continued on our way 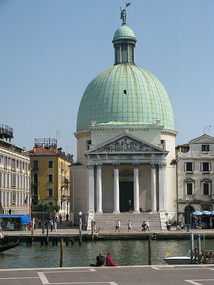 Venice
. Our train to Venice left around 9:58. We arrived in Mestre around 2:20 (we had a connecting train in Bologna).

Mestre is a little city directly across the channel from Venice. We decided to stay there, because it was much cheaper than staying in Venice.

We found our hotel (hotel Piave), which was not too far from the train station. It was also located pretty close to a grocery store. We found this helpful in restocking up on water and snacks for the following days.

After dropping our bags at the hotel, we went back to the train station and got our train to Venice. 10 minutes later, we arrived.

Venice. We decided on this first day to walk around the East side of the island. This is also where my hostel from my last stay in Venice was located. We meandered through the streets, crossing bridges, stopping in souvenir shops, and searching for my old hostel.


Eventually we wound our way back around to St. Mark's square. We then made our way North, again winding our way through the streets. We found a nicer restaurant and decided to give it a try. We had some cheese gnocchi as an appetizer. I had traditional venetian style squid (covered in black ink) and Dilyara had pesto pasta. We also had a half liter of the house white wine.

It was nice to enjoy a fancier dinner than the dinners we had become accustomed to. Next, we walked back toward the train station.


We grabbed the train around 9:04 PM and got back to Mestre to grab some sleep.
Other Entries
-