-
TOday we just had breakfast, which consisted of an egg fried on bread. It was pressed into the bread and made a great taste. We are now heading to the store and one of the largest water parks in Hungary!

The Water Park was great 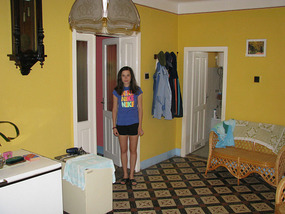 Miky's House
. We had to travel around 45 minutes by car to arrive at the park; however, it was well worth it. We entered the park around 11 AM and stayed until around 5 PM. We rode all of the rides at least once, and most of them multiple times. Since it was a thursday, the park was relatively empty and left us plenty of space to have fun without waiting in long lines.

Another bonus from the water park is that it overlooked a F1 (Formula 1) racetrack. We were able to see some cars practicing and hear their loud engines purring throughout the Hungarian countryside. It was a great adventure, and Dilyara especially enjoyed it because she used to be a major fan of formula 1.

Unfortunately, we did not take any pictures since we did not want our camera to get water on it and break (or leave it unattended).

We returned home around 6 or 7, stopping at a nearby modern day "castle". Unfortunately, the castle thing closed at 6, and we had arrived there at around 5:57

Miky's House
. We immediately went home; however, we had a chance to see the outside (better than nothing).

Upon returning to Miky's house, we were greeted with dinner. It consisted of a cold fruit soup (had fresh picked from their farm cherries, other fruits, and spices), Baked Chicken Legs, and a fried vegetable (something like zuchinni, but larger). It was all very tasty. And a trip to Hungary would never be complete without the addition of Paulinka ( a traditional Hungarian spirit). This spirit is created from old fermented fruits/vegetables and was %52 percent alcohol. We all dreaded this moment, but accepted our glasses graciously as our friend's father poured them(as we knew it would unpolite to refuse). Even our Hungarian friend does necessarily "enjoy" the drink.

We drank, ate, and discussed over the wondrous meal

The evening ended with a game of chess between Miky's father and myself. We had both not played chess for quite a long time, but knew the game. With the aid of our beverages, it made for an interesting game which ultimately ended in a stalemate.

All-in-all it was a great day. We are headed to Budapest tomorrow.