-
Today was our day for Budapest. We woke around 9AM and had breakfast. Breakfast consisted of Bread, Cheese, Honey, Butter, Salami. All of which you could combine any way possible. Everyone had a good laugh at me, since I combined them all...

We made our way to Downtown Budapest around 10:30 AM and arrived to our parking place around 11:45 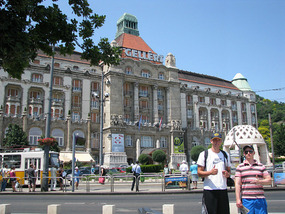 Budapest Downtown
. We then needed to take a bus to get to downtown. After disembarking from the bus, we walked through the city until 6 PM. It was a nice 36 degrees celcius the whole day and we drank around 6- 1.5 liter bottles of water

After seeing almost everything, we returned home for dinner and sleeping. We had originally planned to see Miky's friends in a bar near his home; however, other plans arose for his friends so we stayed at his house and spoke with his parents.

Dinner consisted of a spicy potato/onion mix, home-made sausages, and bread. It was very tasty and overall amazing. Our friend's father brought out the Paulinka again and had our small glasses. Each glass consisted of about 2.5 shots of the beverage, and each of us suffered through every milliliters (except our friend's father).

After dinner, we walked through their garden and ate some cherries from their cherry tree and rasberries from the garden. We then showed Miky's parents some youtube videos about Kazan (Where Dilyara is from) and Charleston, SC (where Dilyara and I currently live). It was nice, because it gave them a view of where we are from/ where we have been.

We then sat around and conversed for some time, then called it a night. Tomorrow, we will go bowling in downtown Budapest, and may visit some Museums. We took pictures today and they should be accessible with this entry.