Here, There, And Back Again

-
Today was quite a full day!

We woke up and had breakfast which consisted of bread, cheese, sausage, yoghurt, and fresh vegetables 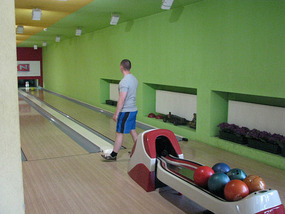 Then, we left around 11AM to go bowling with Miky and one of his friends. We all met up at the bowling alley at 1:30. It was an interesting venue. On the first floor, it was an indoor gocart track and motorcycle shop. On the second floor, it was a bar with bowling (2 lanes), pool, and other casual games. Our lane was a little bit crooked... at first I thought that I was just playing poorly; however, it was happening to everyone... any "straight ball" would always fall to the left.

It made the game interesting, and somehow Dilyara was playing exceptionally well (scoring 2 strikes and a number of spares in the first game).

After bowling two games (Dilyara won one game, I won the other), we decided that we had enough of that and grabbed some lunch. We all ordered different pizzas. Dilyara got a basic margherita pizza and I got a pizza titled "The Hungarian Pizza" (it had sausage, bacon, peppers, and some other stuff) 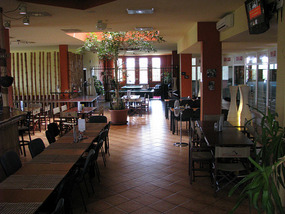 Bowling Alley
. By this time, it was around 3PM and we departed to meet some other friends about an hour away.

After we completed the drive, we found ourselves in a winery. There were many of them scattered throughout the countryside that had begun as family owned businesses and are still working today. They let us try their wines for free, and the people we met up with purchased one of their favorites; a rose only found at that winery.

We then drove for about 30 minutes to another winery location. At the entrance to this little "wine village" was a tall lookout tower. We climbed the tower, which gave us a beautiful view of the surrounding landscapes.

Next, we descended the tower and walked into the little village. We walked past a quaint, white, nice one, but quickly turned around and went inside after Dilyara saw a dog laying on the floor inside (she loves animals and wanted to touch it). We went inside and found that it was an extremely nice place

Bowling Alley
. We shared a bottle of sparkling wine and ate some special hungarian bread things. For everything, it cost $14 . It was a great wine, great location, and great service. We were pretty much the only ones there, so it was very relaxed and enjoyable.

We left this location by car around 7PM to move to another must see part of Budapest. The 45 minute drive took us to one of the highest overlooks on the Buda side of Budapest. It gave a spectacular view of the whole city of Budapest. Our friends brought their purchased wine from the previous store and we drank some while eating some Hungarian dessert things. They were kind of a thin rolled dough with certain fillings which consisted of one of the following; apple, cottage cheese, poppy seed, apricot, and cabbage. The apricot, apple, and cottage cheese were mine and Dilyara's favorite.

After relaxing for some time, we said bye to our other Hungarian friends and Miky took us back to his house. We arrive around 10:20 PM.

Tomorrow, we will leave for Bratislava at 7AM. Our friend, Miky, and his friend will accompany us to Bratislava by car. They will then stay the night and tour the city with us. We are excited to have picked up some travel companions in one of our first cities!

So long Budapest, it has been fun!

Are the cabbage rolls similar to the ones that Dilyara's Mom (Irina) made for us in Kazan?