-
We began the day at 8 AM and enjoyed the included breakfast for an hour, or so. Then, made our way into the city.

Since we had seen about half of the city yesterday, we had everything lined up for today and new that we could easily see the remainder of the city 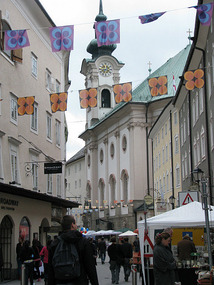 City Streets
. Then we could just enjoy the evening, check out some souvenir shops, and relax a little bit.

After walking along the river the day before, we decided to make our way through another route(passing the train station and approaching the old city from the other side today) to ultimately reach the castle. I was particularly interested in taking this route, because it was the same way that I had walked in 2009. Surprisingly...., I forgot the way and we found our 35 minute walk, turn into about an hour and ten minute walk.

Happy we got to see so much more than we intended, we started into the old city (the part on the other side of the river, opposite the castle) and explored around. We saw a nice palace with gardens, the house where Mozart lived, and a couple of church's.

Around 12 PM, we made it back to the central river and decided to make our way to the castle. On the way, we passed a lot of the little market stores and took our time playing/examining the trinkets each one had to offer. We wound up buying a chocolate pretzel right before we took the hike up the mountain.

With all the walking, visiting, and climbing we wound up at the castle around 2PM. The entrance price was 7.80 Euro per person. It was a little pricy, but we enjoyed looking around the castle. I had remembered it as being one of the most entertaining castles that I had been to, so that added to our reasoning for visiting it 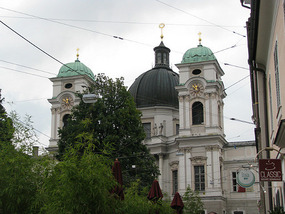 We spent about 2 hours at the castle and then headed back down into the town to grab some food. Deciding on the student food of a Turkish Doner Kebap (for me) and Falafel (for Dilyara), we went to the next one we found. After smashing down some intense food, we passed through all the nice little streets and began walking looking for a place to have a relaxed drink.

Happening upon a little cafe on a side street we went to sit down. The main reasons for stopping at this particular cafe was because I really needed a restroom stop (and otherwise you have to pay anywhere to use the restroom). As soon as we entered into the cafe's area (they had an inside and outside seating area), I started to scout for a restroom. Of course, as soon as I started my scouting, an older gentleman began talking to us, because he heard us speaking English. The first question I asked him was "Do you know if they have a bathroom here?". I guess that was not enough of a hint, but he continued to talk for some time 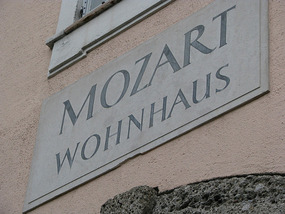 After politely listening and responding as long as possible, I finally had the opportunity to rudely (not intentionally rudely) end the conversation and excuse myself to the restroom.

Once I returned to the table, Dilyara and I began to examine the menu. Since she and I had grabbed some cheaper food earlier, we thought that we would have 1 drink, chat about the day and relax.

Just then the older gentleman's wife approached us and began speaking with us. She was nice, just as he was, and I saw this as a chance to right my "rudeness" from earlier. We invited them to sit at our table with us and chat; however, they were on their way out and couldn't stay. We all parted on happy terms, without any "hard feelings".

Right after they had left, conversations began with the table next to us. They were a family of 4 from Virginia Beach, who were avid travelers

Church
. Since, we also love traveling, our tables "clicked" and we began chatting about "dos and don'ts" of certain locations, where to go, what's important, etc. We chatted for about an 45 minutes, finished sipping on our drinks, and then we were thinking about asking for the check.

Before I had the opportunity to ask for the check, the table we had been chatting with asked for their check and insisted on taking ours as well. We were/are very grateful for their generosity and will definitely remember to pay it forward during our future travels! I guess this time, the North beat the South in "Southern Hospitality".

Since it was still fairly early, we decided to walk through all the cute "little village" streets again. While doing so, we decided that still needed to try a traditional Salzburg food; the Nokerln. We found another cafe, sat down, and ordered it. When it came to the table, it was huge. Three large dumpling shaped objects that had been baked together.

After digging into the dish, we found it to be extremely light. It seemed that the "dumpling" consisted of beaten egg whites, that were then baked, with fruit in the bottom. I found it interesting and the taste kind of grew on me. I do not think Dilyara found it very tasty, as I wound up finishing her portion.

We finished up at the cafe and began the 35 minute walk home. While we were doing so, we noticed some odd happenings about the central river in Salzburg. Apparently, a tour boat engine was on fire, so they had to evacuate the boat of her passengers. This involved the red cross, police, firefighters, the whole 9 yards. They had those little boats working in perfect unison to slowly disembark all of the passengers and bring them to dry land. We watched the events for about 25 minutes, then continued on our journey home.

The rest of the evening was pretty uneventful; however, after looking at our schedule, the weather, etc, we decided to skip a couple originally planned in our schedule stops for tomorrow; Innsbruck and Bregenz. Instead we plan to stop in Vaduz, Liechtenstein tomorrow, then straight to Zurich, which we just booked for 2 nights starting tomorrow.