-
We made our way toward The train station St. Lazare . It was about an hour walk from our hotel. Since we left around 11AM, we made it their around 12PM. It was a nice walk though, and we saw a couple markets and other streets in Paris. 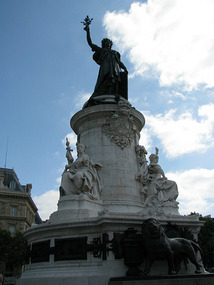 Paris
. Since there was one running every 10 minutes, we were able to get on pretty quickly.

The train ride was about 30 minutes long; however, it was not uneventful. ARound 7 minutes into the ride, a guy got on the train and started yelling. He yelled the entire ride. We think that he was asking for money. While he was yelling, a woman with a baby came around to everyone and tried to ask for money. When she approached his area.... he started yelling at her more. We think that he was telling her to get off his train and that he wanted everyone's money. Needless to say, she got out of our traincar as soon as possible.

After arriving at the Versailles train station, we began to talk toward the palace. After about 30 minutes, we approached the palace from the right side. We enjoyed the views of the palace from the outside, walked around the gardens, and ate a couple paninis (Florence and Vegetarian). We stayed in Versailles about 2 hours, but didn't go into the palace. The line was super long and it was pretty expensive....

We walked back to the train station and made our way back toward the city. This time, we took a subway (instead of walking an hour) back to the hotel. We got ready and met our French Friends again at 7PM. This time, a few of their friends accompanied them and we enjoyed another social evening.

Again, we went to bed around 1 AM.