-
We decided to stay one more night in Paris, because one of our friends invited us to stay at her place.

We checked out of our hotel, made our way to the train station Gar De Lyon 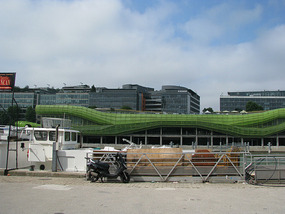 Paris
. After arriving at the train station, we dropped of our bags and began our day. We had originally wanted to go on the free tour in Paris at 11AM; however, we missed the tour (by 15 minutes) and decided that we could take the one at 1 PM.

While waiting for the 1PM tour to start, we walked by Notre Dame and went a little way down Rivoli street. As 1PM neared, we moved toward St. Michaels square (the starting point). This time, we arrived about 30 minutes early, and Dilara and I decided to grab something to eat. We ate two sandwhiches (mine was a meat pie, DIlyara's was a camenbert ). Then we grabbed some crepes (mine was egg and cheese, Dilyara's was Nutella).

The tour started at 1 and lasted until 3:30. We began at St. Michael place and ended at the Obelisk in Paris. It was very informative and enjoyable. Since, we were meeting our friend at 5:30 PM so she could show us how to get to her house, we went and collected our bags and made our way to the meeting point

We met our friend, took showers, and then went back into Paris for a dinner with two of our French friends. It was a nicer restaurant.... I ate baby pig in a milky creme sauce (very tasty), Dilyara had a vegetarian dish, our French friends had partially cooked veal and rabbit. I tried all the dishes and they were all tasty(except the uncooked veal...it was more chewy than I prefer). We all agreed that mine was the best, and it is a well known dish that this restaurant prepares.

Our dinner ended around 11PM and we made our way to a party of one of our other french friends. We met a ton of french people, and other not-french people. It was an interesting group at this party. One of the people we met is working on a PhD and studies with the LGH (large Hadron Collidor). Another one works with Ubisoft and helps design the Assasins Creed Games. We had a lot of great conversations and met a lot of cool people.

We went to sleep around 4AM.