Why we love train stations...

-
Today, we had a lot planned; however, it didn't all work out.

We originally intended to wake up around 8AM, leave at 9AM and reserve our seats for the train to Madrid 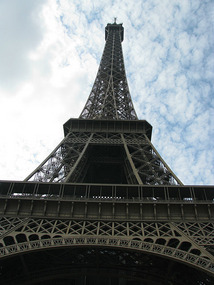 Paris
. Then we were going to hang out with our french friends a couple of hours, see the Eiffel Tower up close, Arch De Triumph up close, and walk through Paris a little more before boarding the 6PM train.

What actually happened? We woke up at 8AM and left at 9:20ish. We arrived to the train station and found a huge line at the ticket center. We got a number and stood in line, just like we have done in the other French train stations...After we finally arrived to the front of the line, we were anxious to get the reservations and begin seeing more of Paris; however, the train to Madrid was full. We did not want to pay 200 euros to reserve a trip for tomorrow, so we needed to "regroup".

We walked about 8 minutes a a nearby McDonalds and began browsing the internet.

It was all very hectic from that point on but in a nutshell we returned to that train station line, waited another 30 minutes, did not get any helpful information (because the woman did not speak english), went to a nearby train station, stood in line for an hour, then they told us this was the wrong line in this station (I guess this is the only station that does things differently), so we went downstairs to another line, waited another hour, then finally got our reservations for a train to Montpellier, leaving at 6:07 PM.... It was now 3 PM.

We literally arrived 30 seconds before they closed the doors and departed...

In a hot sweaty mess, we departed for Montpellier.

Even though we did not see that many tourist things this time in Paris... we were ok. We had both been to Paris on other trips and had been in all the museums and done the normal touristy stuff. This time we enjoyed what we saw and enjoyed visiting with friends.