-
This morning we woke up around 9AM. We wanted to make sure that we would arrive in time for the free city tour at 11AM. We got ready and left our hostel (Hostel Lenin).

Hunger was already taking over our bellies, so we decided to stop in the same grocery store that we found yesterday 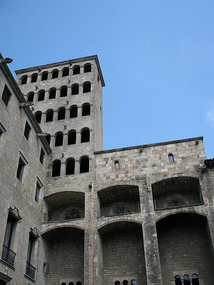 Barcelona
. We grabbed some yoghurt drinks and waters, then went on the search for real food; while on the way to the tour meeting location.

We found a little fast food restaurant and had some chicken sticks (for me), mozzarella sticks, and some potatoes bravas (a Spanish fried potato dish with a zesty sauce). It is pretty much like American French fries, but larger.

The free tour started near the main cathedral in Barcelona. It was informative and we learned a lot about the independence Catalonia struggle, where Barcelona came from, and some interesting backgrounds about specific  city areas. The tour lasted about 3 hours and ended close to the Barcelona port.

By this time, we were hungry again and stopped for a real lunch. I had a whole fish (head, bones, tail), ham croquettes, and some chocolate dessert. Dilyara had a goat cheese salad, grilled vegetables, and crème brule with brown sugar for dessert.

We then proceeded on one of our longest walking days ever. We began by going south and walking along the port. This took us right by the Christopher Columbus statue. After we had seen everything around the port, we walked west up the large hill next to Barcelona.

It was quite a hike, but we eventually made it. And we ended at the national art museum in Barcelona

Barcelona
description
. This is a beautiful museum that looks like a huge palace. It has huge fountains and is built high on the hill. They even have outside escalators to help reach the top. I wish that we had known that before we took the long route and walked all the way up.

We then made our way down and walked over to the train station to make reservations to allow us to ride to Valencia on fast trains; however, upon arrival, we found the line to be over 4 hours long… just to inquire about the seats. We thought the seats would probably be full and it would be a waste of time, so we decided to take the "slow" trains which will leave tomorrow morning.

With our remaining time, we took the Subway to Park Guell. This is the park that Gaudi helped design and has very interesting house sculptures . He also used many ceramic tiles to form the designs.

After the park, we decided to head back to the hostel and prepare ourselves to meet up with our Spanish friend (Cesar).

After cleaning ourselves up we made our way to the meeting point our friend told us (Plaza Catalonia, in front of Hard Rock Café). We met him and had a great evening catching up about old times, etc.

He caught the last bus back to his house at 12:45 AM. Dilyara and I then proceeded to take the 45 minute walk to Sagrada Familia (the big church in Barcelona). Unfortunately, it was not lit up at night, so we were only able to stare in awe at the dark silhouette before us. After looking at it a little bit, we walked back to the hostel and grabbed some sleep before our train to Valencia.
Other Entries
-