-
Just on the edge of the city there is a very nice science museum linked with an aquarium and an omnimax theater, called City of Arts and Sciences. We knew that we wanted to explore these museums so we had planned accordingly for this day. We had originally planned to take a bus to the outskirts of the city in order to see these attractions; however, we wound up walking. It was about a 45 minute walk and we found ourselves at the museum at 11AM.

We purchased a combo ticket, which included all three attractions and found out that we had our omnimax show at 12 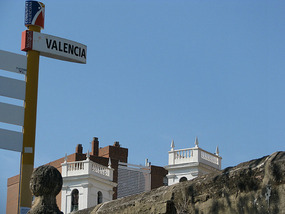 Valencia
. We went to the first floor of the museum for about 45 minutes and then saw our show "Journey Along the Nile". It was interesting and talked about how a team explored the entire Nile, from start to finish.

Next, we wanted to see the aquarium, since it closed a little earlier than the science museum and we thought they might have some dolphin shows at specific times.

We got into the aquarium and saw all of their exhibits, it turned out that this aquarium is the largest one in Europe. That was pretty neat. We also got to watch a dolphin show, where we got the chance to see some tricks that we had never seen before. One of these included two dolphins pushing the trainer by his/her feet down deep into the water, then shooting up through the water at top speed and all three of them going about 20 feet into the air. It was a great show.

Finishing up at the aquarium around 4:30, we made our way to the science museum 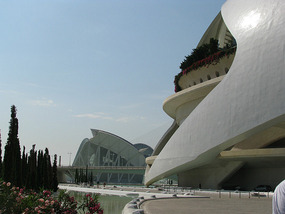 Valencia
. It had everything and was very hands on. Our favorite floor was a floor talking about different human chromosomes. Each chromosome had an interactive station and it was very engaging.

We finished up at the museum around 8 PM and began our walk back toward the main part of the city. This group of museums is a must see if in Spain. The buildings were of futuristic design and the shows/activities were great. It was a good day trip.

We now needed to go to the train station and reserve our tickets on the fast train to Madrid for tomorrow. We arrived in one of the train stations and spoke with an information representative. She informed us to go to the next train station (about 10 minutes away) to make the reservations. We continued walking, arrived at the station, and luckily got the reservations. It was about 10 in the evening when we walked out of the train station, it started getting dark and rainy, so we ran to one of the paella restaurants right next to our hostel and had dinner like real Spanish – late at night. We ordered a huge vegetable paella (they always say it's a minimum of 2 people), some tapas and, of course, sangria. It was nice to just sit down and relax after all those museums today. We got home at about 12 and went straight to sleep.

Our train tomorrow will be at 4 PM.
Other Entries
-