From Hills(Madrid) To Mountains (Here)

-
So yesterday evening, we arrived in Granada pretty late. We only grabbed some dinner near our hostel (I had a Bolognese pasta and Dilyara had vegetarian pasta) and wound up sleeping around 11:30 PM. 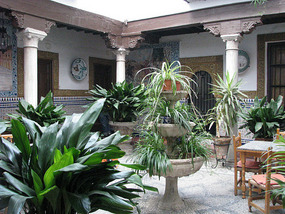 Arriving at Plaza Nueva at 11AM, we were just in time for the tour and set off. The tour took us all over Granada and we saw all of the nooks and crannies of the city. It was a very beautiful city and I would love to go back when I have more time to relax and enjoy the surroundings. I would recommend this tour to anyone visiting the city.

After the tour, Dilyara and I hurried back to Plaza Nueva, where we were meeting some Australian friends we met on the Pub Crawl in Madrid. We met up with them at 1:30 and sat down to grab some lunch. A couple sangrias and a lot of conversation later, we parted our ways. They were a very nice couple and hopefully our paths will cross again in the future.

Now, Dilyara and I had a decision to make. It was already 3:15 PM, when we finished dining with our friends, and we did not know if we wanted to visit Alhambra or not. We finally decided not to, because it seemed a lot like Alcazar in Seville and it cost like 15 Euro per person to get in

Granada
. Instead, we decided to take some adventures down random streets without looking at our map. This took us on the other side of Granada, opposite from where the morning tour had taken us, and showed us some more wonderous views of the city.

Our overnight train was set to leave at 9PM, so we stopped in one more little café place. Here we ordered 1 liter of sangria. To our amazement, they brought out at least 10 dollars worth of various tapas along with the drink. It was included, unfortunately (or great for me), it was mostly meat. The waiter was sad when he found out the Dilyara was vegetarian; however, had a chance to redeem himself when we ordered a second sangria. This time, he brought out 10 dollars of vegetarian food. So, filled to the brim with Sangria and tapas, we began our journey back to the hostel to retrieve our bags and return to the train station.

The overnight train was set to go to Barcelona. The sleeper cabins are separated by boys/girls, so Dilyara and I had to sleep separately. We got our items arranged where they needed to be, and fell asleep.
Other Entries
-