-
We woke up and left the hostel at approximately 9 in the morning and went straight to the old city center to visit the interior of the Alcazar. It was 4 euro per student for us, and it was worth every euro cent. The Alcazar is basically an Islamic palace, that has many Christian/Moorish influences "pushed" into it. This is due to the constant changes in who owned the territory. The rooms contained many eccentric arches, nicely painted walls, and high-vaulted ceilings. There were also many gardens an fountains interlaced with the building (they even had two peacocks!).

After the Alcazar, we walked around the cathedral again, passed through many street markets on our way to Plaza de Espana, saw Plaza de Espana (do not miss this if you visit!), walked through a large garden to see the exterior of three museums (this is called the American Plaza), then walked along the river until we reached to bull fighting ring 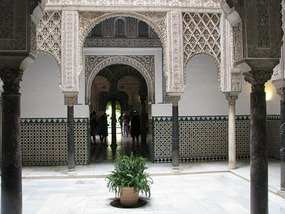 By this time, we had walked nonstop until 1:30 PM and were going to try and meet up with our new friends from Madrid at 3:30PM next to the cathedral. We found a small café and sat down to write them some messages.

We wound up eating some tapas and, unfortunately, were not able to meet up with our friends due to schedule differences. Instead, we walked some more in the old city, after we finished up at the café. Then, we grabbed our bags and headed to the train station for our 6 PM train to Granada. We should arrive in Granada at 9:30 PM.
Other Entries
-