Stumbled on a Festival

-
We arrived in Avignon around 2 PM. After our arrival, we immediately began searching for a luggage locker location. Not finding any answers to our inquiries at the train station, we followed the signs toward the tourist information booth.

Carrying our bags, we walked into the city of Avignon (because this is where the signs took us for the tourist information) 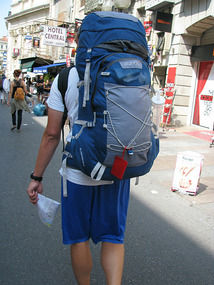 Avignon
. It was a "mad-house". It turned out that we stumbled on some big festival, which lasts the entirety of July. I had wanted to return to Avignon (having previously visited in in 1010), to show DIlyara the calmness and uniqueness of the city. The city is somewhat small, but still has a wall surrounding the entirety of it. It is great to walk around the outskirts of the city and examine the small streets, the old wall, and the interesting shops.

We finally found the tourist information shop, located near the city of the city and got in line to speak with the information representative. Once our turn came around, we asked the woman a series of questions... one of the most important being "where can we store our bags?". The woman informed us about the festival (it was a music and arts festival), and then also informed us that there was nowhere to store our bags inside of the city. We took a free map and walked out.

Since their were no formal luggage lockers, we thought we would try our luck at a hotel. After asking the hotel clerk if we could leave our bags for a few hours in exchange for some cash, he said "no, it is illegal". So we couldn't do that. Our only option was to proceed carrying our bags.

As I previously mentioned, the city was chaotic. The main street of the city was crammed with people and all shops on the side-streets were closed due to the festival. Navigating the crowds was a challenge, especially with our bags. There were many street performers, some performing plays, some dancing, etc.

We made our way all the way down the main street, climbed to the top of the large park in the middle of the city, which is next to the old city castle. This gave us a great view from above of the river below. We then made our way down some steps behind the castle. After winding our way through a couple more uncrowded (all the shops were closed) streets, we decided to explore the old, old town streets then make our way back to the train station.

After exploring the streets, the sky began to grow dark and some rain drops began to fall. We made our way back to the train station just before the storm broke and got on a train around 5 PM to go to Marsaille.