-
We arrived in Marsaille hotel(Ibis Styles Hotel) around 7 PM. This hotel was somewhat far from the city center, so we checked in and then browsed around what we could do. We walked a couple blocks in all direction from our hotel and found nothing happening, so we returned to a small Doner Kebap place near our Hotel and grabbed some Pizza, A Falafel wrap, and a Doner Kebap wrap. We brought these up to our room ate, then grabbed some sleep to prepare for the next day.

After waking up at 8 AM, we grabbed some free breakfast then returned to the room 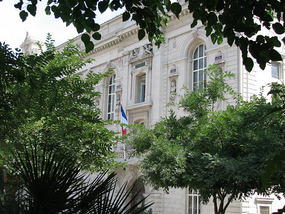 Marseille
. Facing some serious sleep deprivation, I went back to sleep until 11AM. Dilyara uploaded some pictures to the computer . We headed out to the city around 11:30.

We walked to the port area of Marsaille (about a 30-45 minute walk) and saw some interesting sculptures about the city. It turns out that they were all made from Dahli's paintings. So we saw long-legged elephants, clocks, etc.

We decided to take a boat ride to the Castle of If. The boat left around 1:15 and took about 15 minutes to arrive at the island. This is the castle/island where the Count of Monte Cristo takes place. We explored the castle/island and took the boat back to the Port of Marsaille at 3:45 PM.

After returning to the port, we began to walk through the areas that were highlighted on our map. After exploring some of the old town and seeing a large church, a storm opened up on us. It was the real deal. Lightning, Rain, Thunder. We were not able to see as much of the Port fortresses as we had wanted to, but we had to escape the rain. We grabbed a subway back to our hotel around 7:30 PM. We grabbed some pizza and a doner kebap wrap and slept our second night in Marsaille.

We woke up around 5 AM and grabbed some breakfast with our bags at 6 AM. We then jumped on a train to Nice.